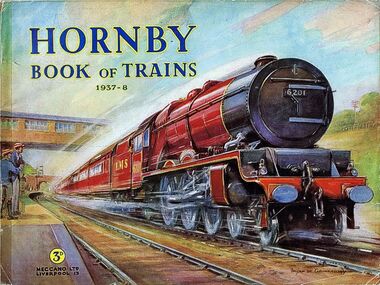 A copy of the softback The 1937-38 Hornby Book of Trains, complete.

The issue features a painting by Bryan de Grineau of a train hauled by the 6201 Princess Elizabeth locomotive, rushing through a station as two schoolboys look on.

1937 marked the release of Hornby's prestigious "flagship" 4-6-2 6201 Princess Elizabeth locomotive, the largest loco that Hornby had ever produced.

One oddity of the painting is that it appears not to capture the distinctive tapered boiler of the Princess Class, and looks suspiciously more like a view of the Princess' immediate predecessor - the earlier cylindrical-boilered Royal Scot loco that had appeared on so many of the earlier covers. While this might lead one to suspect that perhaps the painting had originally been of the earlier-class loco, and converted into a "Princess" for the launch of the new Hornby model, the apparent absence of tapering may simply be the result of the strong perspective used in the painting (which would make the front of the boiler appear disproportionally wider than in real life)