Category:Snow White and the Seven Dwarfs 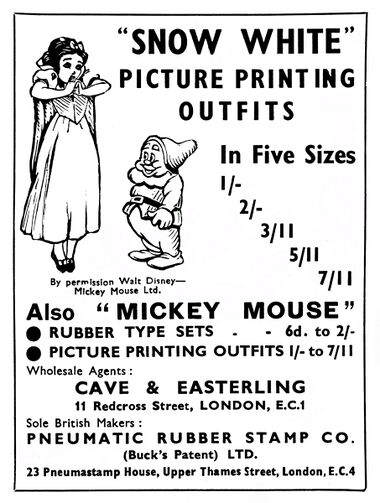 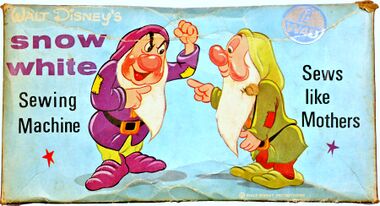 Walt Disney's Snow White and the Seven Dwarfs was the company's (and the World's!) first full feature-length animated movie. Costing a vast amount of money to produce, and widely predicted to be a dismal failure, Snow White opened in 1937 to rapturous reviews and became one of the biggest earning films of all time.

Based on a classic fairy tale, the same basic story outline of Snow White was published by the Brothers Grimm in 1812, and was picked by Walt Disney partly because of the comic slapstick possibilities of the Seven Dwarfs (Disney ma have been influenced by the previous stage show, which had also given the Dwarfs names, although Disney's were different).

As subject material, "Snow White" had the advantages of good "brand recognition" (potential ticketbuyers didn't need anyone to explain what the film was about), the story would be familiar to both parents and their children and could attract families, and ... critically ... was emphatically out of copyright.

The massive success of Snow White immediately spawned a rash of licensing deals, ranging from the literal (such as lead figures of the main characters) to the indirect (Snow White Bagatelle), and the frankly rather strained (the disappointing Snow White sewing machine, whose main link to the film was the extravagant graphics on its cardboard box).

By naming the dwarfs and giving Snow White a distinctive "look", Disney were able to claim a form of ownership over the characters ... after all, Bashful, Happy, Grumpy, Sneezy, Sleepy, Dopey and Doc were Disney inventions, and there wasn't much point in anyone producing Snow White merchandise if their "Snow" didn't look like Disney's.

Pages in category ‘Snow White and the Seven Dwarfs’

Media in category ‘Snow White and the Seven Dwarfs’