A maroon 6-wheeled Passenger Brake Van (Hornby-Dublo 4076), marked M 32958 STOVE. The "passenger" part of the name refers to the fact that the van was designed for high-speed express passenger trains (as opposed to goods trains).

This "stumpy" combined passenger/brake van was styled in yellow-striped maroon to match the normal passenger carriages, and was a useful addition to a Dublo set if the owner wanted to add one to the end of a passenger train to create the general impression of having an extra passenger carriage in the train, without making the resulting train too long. The van's launch-advertising in Meccano Magazine appeared in the October 1963 issue, along with a promotional editorial piece. 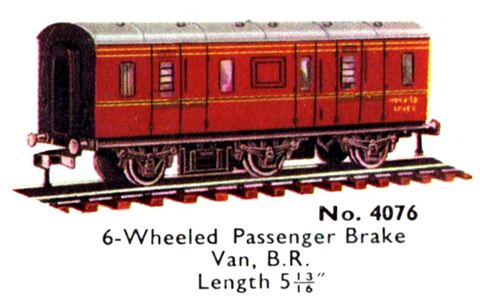 " Now for No.4076 Six-Wheeled Passenger Brake Van. This strikes a distinctive note, for it is actually the first passenger-type vehicle in Hornby-Dublo to be mounted on six wheels. Its design and construction are in keeping with the standards now usual in Hornby-Dublo coachbuilding. The bodysides and base are of metal, while the detailed roof ends and underframe are formed of plastic mouldings. The windows are "glazed" with transparent plastic and opposite certain of the window openings are the representations of the bars fitted across inside the window glass on the real vehicles in order to prevent any damage that might be caused by the handling of luggage, etc. inside the van.

The bodysides are finished in B.R. maroon, and the van carries an appropriate London Midland number. The six-wheel underframe is finely detailed, and the axleguards, with axleboxes, springs, and battery boxes are represented.

The new van will be found most useful for adding to the luggage capacity of your passenger train, while it is ideal for use in conjunction with other vans, particularly the bogie No. 4075 Passenger Brake Van, in the formation of trains for mails, parcels, milk, and so on. In addition, it will be quite in order for you to use the new six-wheeler at the tail of your most important express freight trains. "