It's overhead in Arch Four, above the Hornby Wall display. 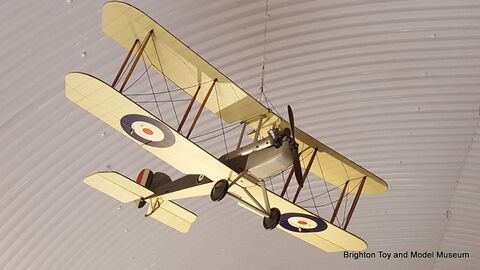 The Royal Aircraft Factory BE2-based biplane design was one of the most influential biplane shapes of the First World War. Designed as a two-seater aircraft, the pilot was placed behind the observer with the observer sitting pretty much at the aircraft's centre of gravity - this meant that the pilot could fly alone without the "missing" weight of the observer unbalancing the aircraft, and also made it comparatively easy to adapt the design for single-seater configurations - the front seat space could be loaded up with other equipment comparatively safely.

The R.A.F. "B.E." designs arguably became fully mature with the B.E.2c (with deliveries starting in 1914), with all later-numbered aircraft essentially being B.E.2c variants. The B.E.12 (introduced in 1916) was a production single-seater version of the B.E.2c, but without researching more into the exact histories and modification histories of every aircraft, it's difficult to know whether our single-seater model represents a purpose-built single-seater "12" or a modified "2c".

The stability of the design made these aircraft great as spotter planes or as photographic reconnaissance aircraft, but meant that they weren't as "nippy" as other aircraft when it came to making sudden manoeuvres, so they weren't ideal as fighter aircraft. Consequently, the number built in the single-seater configuration was comparatively small.

The 2c and 12 had a forward-set upper wing and two sets of struts per side, with the small cutout at the centre of the upper wing first appearing on the 2c. The tail has a skid, and the tailplane has a distinctive curved leading "shark's fin" ahead of the main tail. Our model has a two-bladed propellor rather than the four-bladed version that seems to have been typical of the range, but this might be a pragmatic functional adaptation for the model - since this was built as a radio-controlled aircraft that was meant to be flown (and meant to be seen flying), it was probably less important to have the correct number of blades, as these would visually merge together into a blur when the plane was flying.

The aircraft's naming was to modern minds slightly archaic - the B.E. stood for "Bleriot Experimental", with "Bleriot" meaning that the aircraft propellor was mounted at the front rather than at the rear (known as a "tractor" configuration, as the propellor was "pulling" the plane rather than "pushing" it). Nowadays the idea of having a propellor at the front is such an obvious default configuration that it seems strange to specify this in the aircraft's model number, but in the early days of aviation, the eventual dominance of front-mounted prop designs was not yet obvious.