A Hornby Pullman brown passenger coach with a cream roof, 1935-41.

"Pullman" is printed on the top of the coach in gold, and "Majorie" on a gold bordered black panel beneath the windows. The windows and doors are tinprinted black, with red curtains.

These cream roof models came in for the 1935-6 season after two seasons of the coaches Aurelia, Majorie and Viking sporting different roof colours. They remained cream until production stopped in 1941. 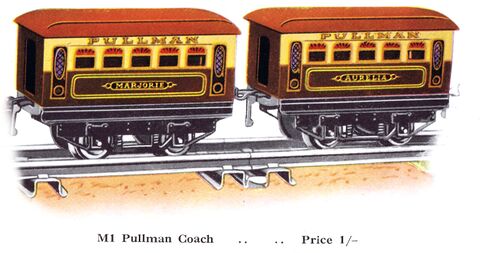