1913: Harbutt's Plasticine for modellers and woodcarvers: Work out your designs first in plasticine [image info] 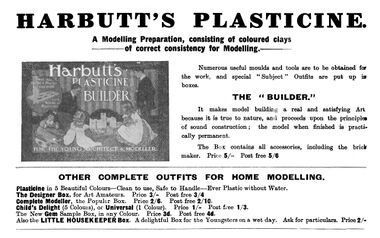 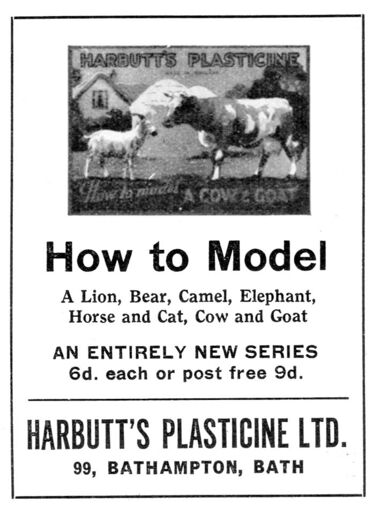 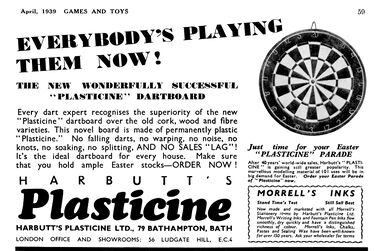 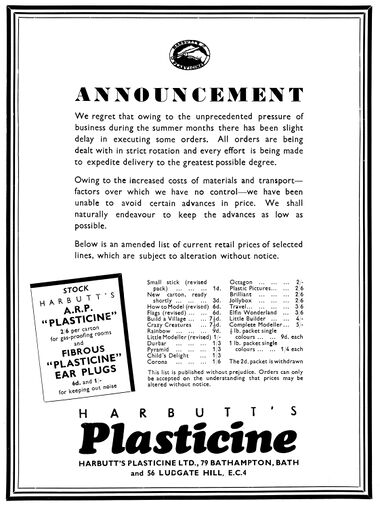 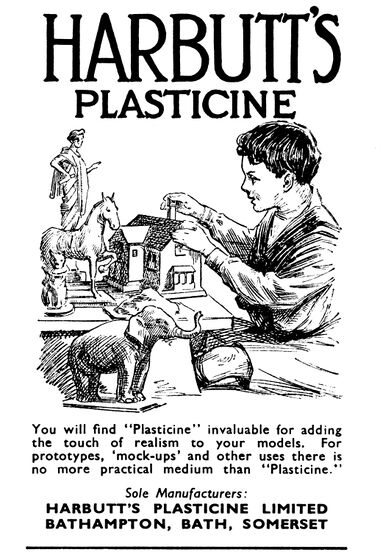 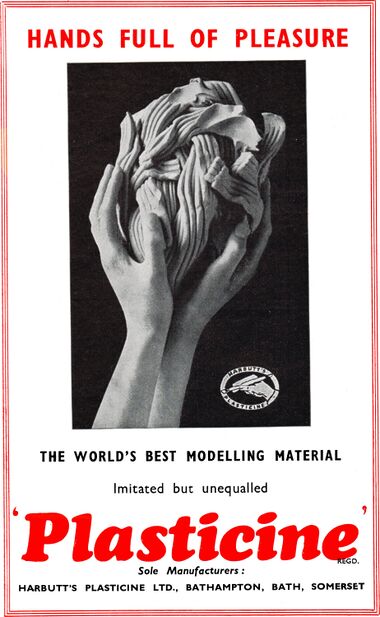 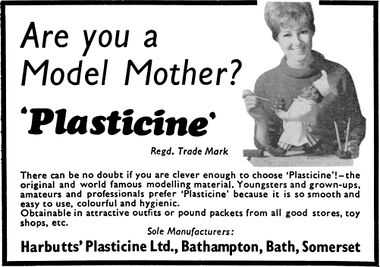 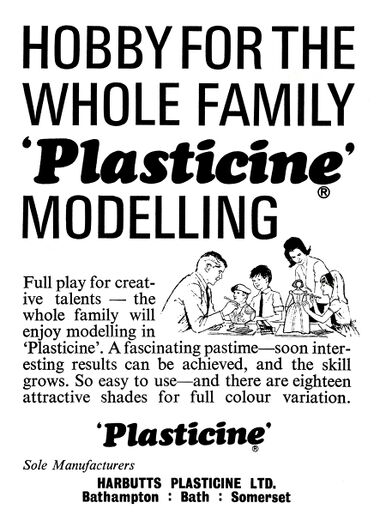 The modelling material Plasticene was invented by William Harbutt (1844-1921), and was manufactured in Bathampton, Bath, England.

We haven't yet tracked down the original patent for Plasticine (which was supposedly applied for circa ~1897 and granted in 1899), but Harbutt's book on how to use Plasticine came out in 1897, and the book and the material were being advertised in 1897.

Unlike its American-origin water-based competitor Play-Doh (which started out being marketed as a "cleaning putty"), Plasticine was very much developed from the outset as a clean, stable modelling material, primarily for art students to practice on.

While clay was excellent for firing to make permanent sculptures, it was problematic as a teaching material due to its tendency to dry out: it might have to be prepared "fresh" in batches and carefully brought to the right consistency, students would come in for their weekly art lessons and start to make something, and after a few weeks, the surface properties for further working could already be deteriorating. Reusing clay meant adding water to replace what had evaporated and passing it through a "mincing machine" type apparatus until the added water was spread consistently through the mix.

Harbutt was artistically trained and had moved to Bath to teach art: consequently the understood the usefulness of an art material for "training" that was ready to use out-of-the box and didn't "age" or require valuable tutor time in preparation. Unlike clay, Plasticine was oil-based rather than water-based ... but it had sufficient additional ingredients not to appear too greasy.

While Harbutt's initial market for his invention (produced in batches in his basement) was art students, the new wonder modelling material eventually found a wider market in modelling shops and toyshops, and ended up being produced in a proper factory.

Plasticine was initially about two thirds inert bulk or filler (initially fine wheat flour, later gypsum), with lanolin, stearic acid and petroleum jelly (e.g. "Vaseline"), mixed with lime (calcium oxide and/or hydroxide). The mixture would undergo a chemical reaction and get warm, and once it had settled down, it would be rolled to remove any water produced in the reaction, and then left to "mature" while exposed to the air for perhaps six months (which would probably give any remaining water the change to evaporate). The lanolin was later replaced by a different agricultural by-product, which supposedly worsened its previously "professional" modelling characteristics ... by not by enough for most people to notice, or to affect toyshop sales aimed at young children.

The "maturing time" was later reduced. For early "homebrew" batches, Harbutt eliminated water from the mixture by attacking it with a garden roller on his basement floor.

Initially produced in grey, Harbutt's artistic sensibilities allowed him to see the value of further R&D to produce Plasticine in a well-chosen range of really bright, vivid, eyecatching colours (which unfortunately didn't translate well to the black-and-white print advertising), and the Plasticine "Rainbow Packs" sold well.

The 2d packet is withdrawn

The "Builder" sets were actual building construction sets ("For the young architect and modeller") and included a sort of stencil piece with rectangular cutouts that Plasticine could be spread into. There was also a special tool for popping out the resulting rectangular blocks for use as bricks ("With the mould and plunger you can make little bricks of Plasticine"), which could then be used to assemble buildings.

It makes model building a real and satisfying Art because it is true to nature, and proceeds upon the principles of sound construction; the model when finished is practically permanent.

The Box contains all accessories, including the brick maker. Price 5/- Post free 5/6

Fibrous plastic compositions. - A plastic composition comprises a mixture of permanently plastic material of the kind usually employed for modelling, such as "plasticine," and fibrous material, such as wool or cotton-wool. Plasticine is stated to have as its chief constituents sulphur and pure vegetable oils. Suitable proportions are 1 lb. of wool per hundredweight of plasticine. The composition is applicable for ear-stoppings for preventing gun deafness, for resetting broken bones, and, when rolled into sheets, as surgical bandages.

Every dart expert recognises the superiority of the new "Plasticine" dartboard over the old cork, wood and fibre varieties. This novel board is made of permanently plastic "Plasticine." No falling darts, no warping, no noise, no knots, no soaking, no splitting, AND NO SALES "LAG"! It's the ideal dartboard for every house. Make sure that you hold ample Easter stocks – ORDER NOW!

A a company with one main product, Harbutt's Plasticine Ltd. seem to have sent a lot of time trying to find new "niches" for their product, with a marked ... some might say shameless ... enthusiasm to use whatever was currently in the public mind to sell more Plasticine.

Harbutts suggested that recovering soldiers might benefit for members of the public buying Plasticine and sending it to hospitals and convalescent homes. Why Harbutts couldn't do this themselves is not clear.

Harbutt's Plasticine: "It is good to have something to do"

There are many of our men in the various hospitals and Convalescent Homes who would benefit largely by having something to occupy their minds; a mind employed has no time for pessimism, and it is the optimistic patient that gets well quickest. If you are interested in any of these brave fellows send them some Plasticine. Organise some small Competitions among them – who can make the best animal, the most amusing figure, the best fort, or who can model the best set of trenches, all in Plasticine; give them something interesting to do, and the days will be all too short.

Plasticine is 1/- per lb., six colours, parcels to the value of 10/- carriage paid. We will tell you how to arrange these competitions if you like. They would be little trouble to you, but what a boon to those whose days pass slowly.

The idea of adding Plasticine to Meccano would make some Meccano purists recoil with horror. Meccano models often exist in their own dedicated world of abstract design aesthetics, where contamination with any "alien" material or colours breaks the spell.

Your Meccano models can be even more lifelike! Added touches with "Plasticine" can make a lot of difference – a little figure here to give that warehouse 'scale' – a tiled roof there, casks, boxes – a hundred and one little accessories all in their correct colourings (there are 16 different colours). You will be surprised at the effect and all your models will be the envy of your friends. There are many interesting outfits ...