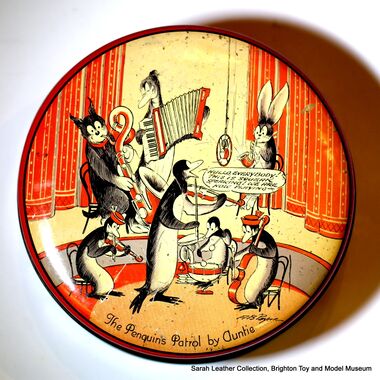 A round mostly-red lithographed tinplate "Pip, Squeak and Wilfred" tin from the 1930s.

The tin lid showcases an illustration of a small jazz band consisting of seven animals (whose members include Pip, Squeak and Wilfred), clustered around a large suspended microphone, in front of a pair of curtains. The lid rim is red, and the tin's round wall is red with depictions of various musical instruments in gold.

"Hullo everybody! This is Squeak speaking! We are now playing–"

, followed by the words along the curved bottom of the lid upper surface,

"The Penguins Patrol by Auntie"

The drawing is signed A. B. Payne (Austin Bowen Payne).

The Penguins' Patrol: A Zoological Comedy Fox-Trot is a piece of dance band music with vocals, credited as "Music by Sherman Myers, Arranged by Ronnie Munro, with words by Erell Reaves", sheet music published by Cecil Lennox Ltd., copyright 1931.