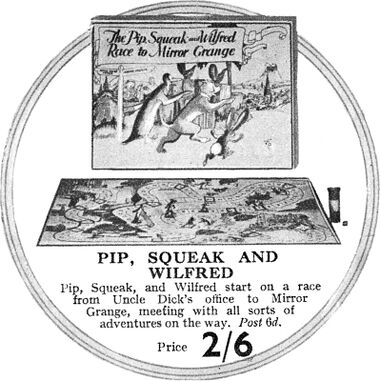 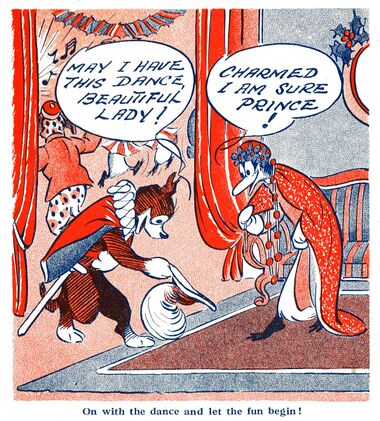 Pip (the dog) and Squeak (the penguin) took on the default roles of mother and father in the animals' makeshift family, with little Wilfred (the rabbit) adopting the role of their child. [image info] 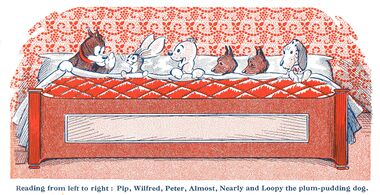 Pip, Squeak and Wilfred were a trio of cartoon characters created by Bertram Lamb that were popular in Britain in the 1920s, first appearing in a cartoon strip in the Daily Mirror in 1919.

Pip (a dog), Squeak (a penguin) and Wilfred (a young rabbit) were three orphaned animals from different backgrounds who banded together to form a makeshift family unit. Appearing in around ~1919, the trio captured the British public's affection and let people see their feelings of loss and dislocation after the personal and social turmoil of WW1 acted out by three brave creatures who optimistically stuck together and helped each other to create a new life after surviving their own personal tragedies.

The success of the characters led to a range of merchandising, books, annuals and silent animated films.

After World War One (generally taken to be 1914-1918, but technically 1914-1919 for the UK), the victorious allies issued the Victory Medal. In the UK this was issued to recipients of the 1914-15 Star and/or the British War Medal, so a lot of ex-servicemen received all three.

The appearance of the three medals at around the same time that the trio of cartoon characters hit the nation's consciousness (circa ~1919) led to the medals being irreverently nicknamed "Pip, Squeak and Wilfred".