A radio-controlled model of the French WW1 Nieuport 10 biplane.

The model is marked out with the "skull and black heart" markings of French air ace Charles Nungesser, and has the number N 1895 on its tail. 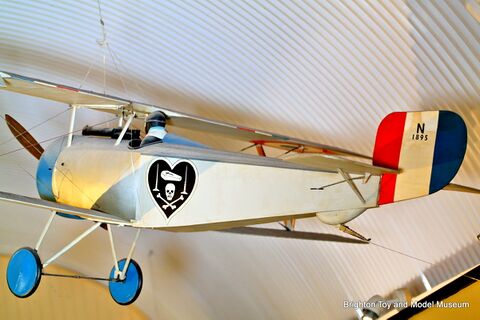 The Ni 10 was the first aeroplane designed by Gustave Delage for the Société Anonyme des Etablissements Nieuport. The plane was originally designed to enter a prize race, but with the outbreak of WW1 the design was modified to become a military aircraft.

The "10" had a thinner lower wing (linked to the upper with distinctive V-struts) to combine the rigidity of a biplane with the better downward visibility of an overhead monoplane. Although it was designed as a two-seater, it was often used as a single-seater aircraft to improve its performance.

Charles Nungesser (1892-1927?) had a somewhat odd life. After becoming a racing car driver in South America in his teens, he managed to "get a go" in an aeroplane, and seems to have decided that if fast cars were great, fast aeroplanes were even better.

Returning to France, Nungesser successfully applied to be a pilot in WW1, and started clocking up victory after victory, eventually achieving a record of 43 victories plus 11 probable downings. Nungesser seems to have embraced the role of air ace, winning medal after medal and hurrying back into the skies after multiple barely-healed injuries. Not only did he have his own plane with his own special "black heart" symbol, but when the rest of his squadron upgraded to a different make of plane, Nungesser upgraded to another Neiuport model, which meant that his plane now looked even more obviously different to those of his fellow pilots.

After the War, Nungesser worked as a stunt pilot, and in 1928 set out to fly across the Atlantic with Francois Coli. It's not known what happened next, but the pair didn't seem to make it to the other side.

The Old Rheineback Aerodrome in Rheineback, NY, USA have a restored example of a Nieuport 10 painted with Nungesser's markings.