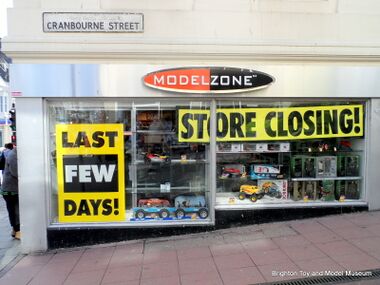 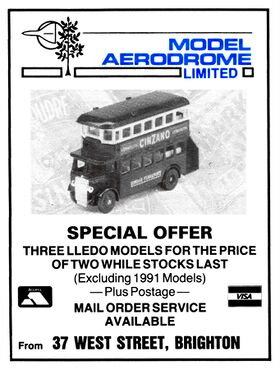 Toy retailer ModelZone ("Model Aerodrome" until 1999) was a major retailer of models and model kits for about three-quarters of a century, and was the UK's largest model and model supplies retailer, with 358 employees and 47 shops distributed across the country.

The Brighton branch was at 37 West Street, on the corner of West Street and Cranbourne Street.

After the ModelZone rebranding, the company acquired some stores from the defunct model retailer Beatties (which had gone bust) and commenced a policy of expansion. At its peak in 2012, it had 47 stores and an online retail business, Amerang.

After the aggressive expansion plan failed, with many of the new shops making losses, the company went into administration in summer 2013. Amerang was sold off to an online competitor, and the administrators started a programme of shop closures.

The original hope was that since there seemed to be a sound core business when the newer loss-making outlets were eliminated, that the chain would survive administration as a viable (albeit smaller) business. However, as August drew to an end without any signs of a potential buyer stepping forward, the administrators announced that all the remaining stores would also be closed, marking the effective end of the company.

In October 2013, WH Smith announced that it had bought the ModelZone brand, and would be opening ModelZone departments in some of the larger WH Smith branches.