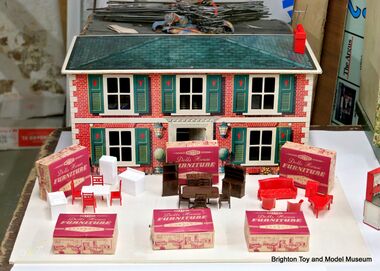 The dollhouse and furniture being studied in the museum's "display workshop" area, in late December 2020, prior to going on display [image info] 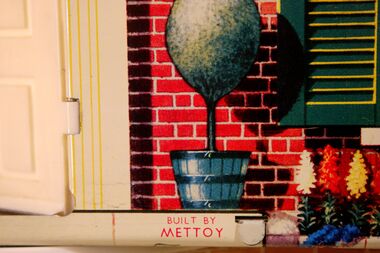 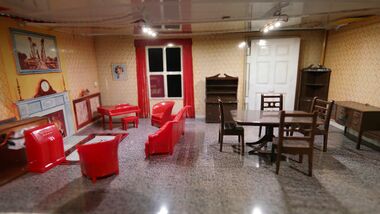 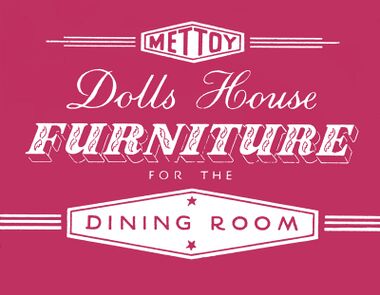 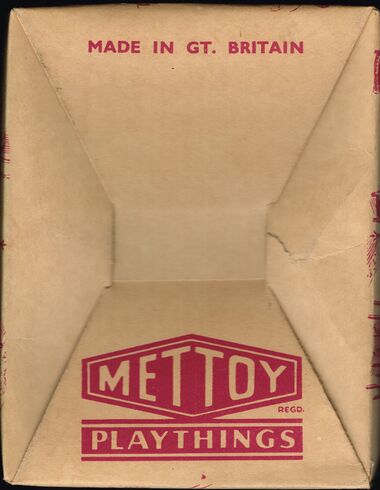 Base of one of the six boxed sets of included plastic furniture. Note the thinness of the card used. [image info]

A rather nice 1:24 scale five-roomed lithographed tinplate Metal Dollhouse (three up, two down) made by Mettoy in the Fifties or Sixties.

Another version uses the same pressings, but lithographed in a tan colour scheme (which is either more subtle and realistic or more drab and boring, depending on your point of view). The interior printing on these two versions seems to be the same or at least very similar.

Advertising and packaging we’ve seen includes the matching garage … we don't know if the house was also ever available for less without the garage, with the garage an optional extra. Of the two examples we have, the complete version (without garage) has the trelliswork printing extending down the right-hand exterior wall down to ground level, allowing the dollhouse to be complete without the garage: the disassembled example we have, that has a garage, has the left-hand internal wall of the garage printed directly onto the right-hand exterior wall of the house, making the garage compulsory. So it would seem that Mettoy made the dollhouse in different versions, to allow the house to be at least usable without the garage.

Some examples seem to have lost their plastic chimney: but perhaps some were sold without. Some packaging and advertising shows a plastic TV antenna, some doesn’t.

To confuse matters further, the Mettoy 1960 catalogue lists the full house-with-garage-and-car-and furniture as being available in two versions – ready-built (catalogue number 6254), and supplied in self-assembly kit form (catalogue number 6255). This means that it can sometimes be difficult to tell whether a component has been deliberately left out at the factory, or simply not included by the owner who assembled the house.

SELF OPENING GARAGE and CAR. One of many Mettoy Playthings.

This superbly designed six roomed house, furnished and complete to the last detail will bring constant joy and endless amusement to any child. Includes garage with self opening overhead door – housing a rubber tyred Shooting Brake, with flywheel mechanism.

COMPLETE TO THE T.V. AERIAL!

An architect designed model of a six-roomed period residence. Ther eis a staircase from ground to first floor and the metal walls are beautifully decorated inside and outside in pleasing, full-colour true to scale details. The garage incorporates the latest self-opening overhead door and includes a highly detailed model of a saloon car with tyred wheels. For exceptional play value all rooms are furnished. Opening front door, chimney and T.V. aerial are included.

As above in dismantled form for easy assembly – simple instructions are included.

Although the house is referred to as six-room, the lounge and dining room have no dividing wall.

A lovely accessory in light walnut finish for the Doll’s House, scaled to the correct size for inclusion in any room. Operated from a standard flashlamp battery, it incorporates a novel switch device – turn the lamp shade for "on" and "off".

The fully furnished version of the dollhouse came with six sets of plastic furniture, one set for each room.

Although supplied in small brown printed boxes presenting them as Mettoy dollhouse furniture, Mettoy didn't actually make the pieces themselves – the items were made by Kleeware.

This explains the mystery of why so much Kleeware dollhouse furniture is available on the second-hand market without any maker's identification marks: pieces that Kleeware would be selling through Mettoy wouldn't be branded, and (since part of the fun of a dollhouse is furnishing it yourself) anyone buying the nice fully-furnished Mettoy dollhouse would be likely to want to buy some better furniture almost immediately.

The dollhouse is displayed in Area 20, with internal illumination and the full set of Kleeware for Mettoy furniture, on a rotating turntable. This is the "non-garage" version of the dollhouse, as the "garaged" version would be too wide to be able to rotate within the confines of the cabinet. Although we have the plastic TV aerial, proudly mentioned in the dollhouse promotional text, this has been removed to allow the dollhouse to fit under the next shelf up.

In order to supply power to the rotating dollhouse, we had to devise a commutator system, which consists of two ring-shaped brass rings cut from brass plate, fixed into the underside of the turntable platter, with a pair of internal contacts. Power is then passed via the commutator to a pair of wires that enter one corner of the dollhouse. For easier servicing, we used a termina block ... but due to the tiny clearances between the underside of the dollhouse and its stand, this had to be putinside the dollhoue itself. To disguise the terminal block, we 3D printed a housing, the same width and height as the bookcase printed on the inside wall of this corner, and covered it with printed card showing a 3D version of the bookcase.

The dollhouse is flanked by the six Mettoy-branded dollhouse boxes, with purple printing on thin brownish card.