The wagon was launched with an advert in the October 1963 issue of Meccano Magazine.

The Hopper Wagon represented Meccano Ltd.'s designers fully embracing the potential of plastic moulding to produce an authentic-looking piece that reproduced complex geometry of the original wagon. Unlike some of the earliest "Super Detail" moulded Dublo pieces which were more or less copying earlier Hornby designs and adding exaggerated-height rivet-heads and detailing in a somewhat gimmicky way to show off what was possible with the new process, the Hopper Wagon represented a more mature use of the medium to tackle a style of rolling stock that would have been difficult to attempt using the earlier materials, except in a much more stylised way.

The decision to make the wagon's couplings removable might also signify that the designers were looking to an uncertain future in which their design might have to be adapted to work with other companies' rolling-stock (Meccano Ltd. was bought out by Lines Brothers shortly after).

" A finely detailed new item of rolling stock, this 31-ton Hopper Wagon has the characteristic sloping interior to take away the load of coal, ore or rock. Finished with grey body and standard black underframe this type of wagon is often made up in complete trains. Length 4 1/4 in. (108 mm) " 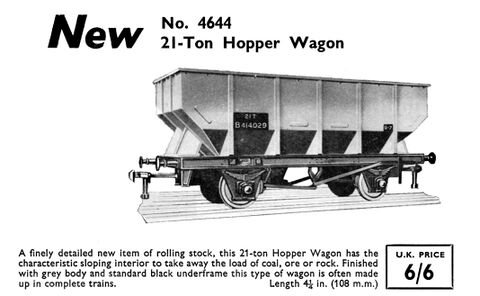 " The Hopper Wagon introduces an attractive new "shape" in wagons and the fact that the bodywork is formed by a plastic moulding process means that there has been ample opportunity for reproducing characteristic details of the real thing. Thus the top edges of the bodysides and ends reproduce the stiffening angles found on the real thing. In addition there are vertical stanchions that help to support and stiffen the real body plates, while the triangular gusset plates add to the character of the Wagon.

The base of the model represents accurately the construction of the real underframe with its channel-section solebars and businesslike axleguards on which are represented the roller bearing axle boxes and springs. Standard Hornby-Dublo disc-type nylon wheels are fitted so that he free-running of the model is ensured. Dummy brake gear is provided in fine detail, the V-hangers, rods and levers being fretted out, as it were, and not merely shown in relief against a solid background.

A change in detail that is important from the maintenance point of view is that the Hornby-Dublo automatic couplings are fitted not with pressed rivets but by means of moulded plugs. Owing to their special form these are removable so that coupling renewal when necessary becomes a relatively simple business. Each plug has a wide head. When this is prised up by means of a penknife blade or something similar the plug can be wihdrawn from its socket. When the plugs are replaced they snap into position and hold the couplings firm.

The bodywork is finished in B.R. wagon grey with white lettering and marking on the usual black patches on the wagon sides "