From The Brighton Toy and Model Index
(Redirected from Greenway)
Jump to:navigation, search 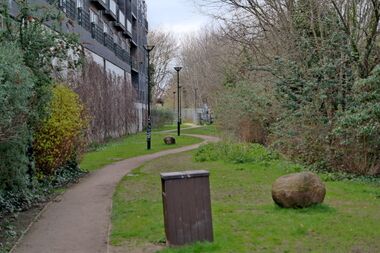 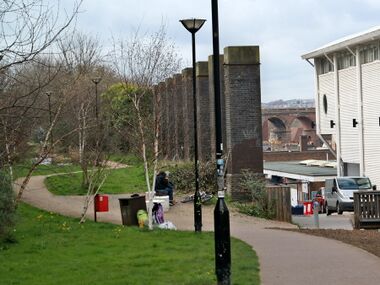 A set of pillars that originally supported part of the Eastern edge of Brighton Locomotive Works, which used to jut over the railway line that was turned into the Greenway. Photo is looking North, with the London Road Viaduct curving Eastwards in the background to the right. These pillars are clearly visible in a photograph of the original building in The James Gray Collection (Regency Society) [image info] 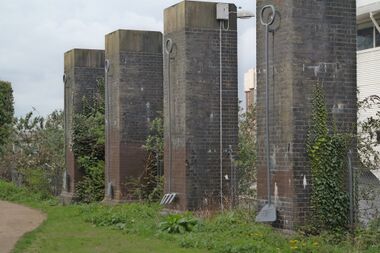 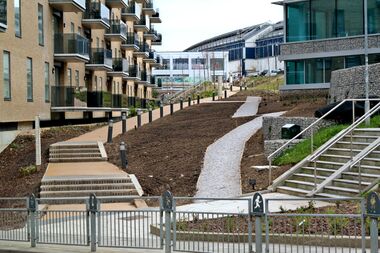 April 2016: Southern Greenway under construction. The view from Stroudley Road up to Brighton Station (top centre, distance) from the end of the North Section of the Greenway, awaiting planting. [image info] 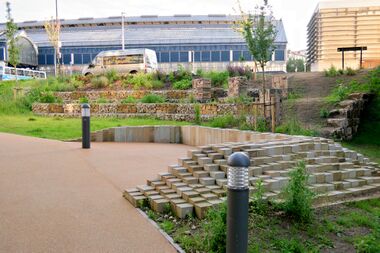 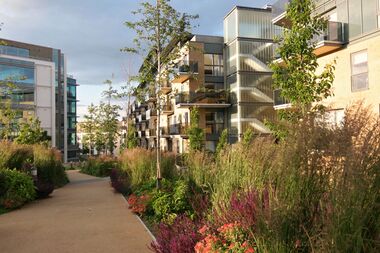 June 2016: new planting flourishing on the approach, view looking away from the station [image info]

Brighton Greenway is a "wild space" near Brighton Station and New England Road, partly on the site of the old Brighton Locomotive Works.

The space is planted with wild plants to encourage insects and birds, and is intended to mature organically to become a "nature corridor" and reserve.

The Greenway was a key component of the original development plans for the New England brownfield development project, but was much-delayed due to negotiations with Network Rail over the exact conditions for allowing access to the bridge over New England Road and the section of land further north owned by them. For some time, the mid-section of the Greenway was a dead end leading to the bridge, and then stopping.

With the opening of the bridge to the public in 2013, the Greenway was able to cross the bridge and become a "through way", reaching a set of steps on the far side of New England Road.

When the Greenway is finally completed, it should open up easy foot access to the station from the Preston Park region, replacing a tortuous car journey that can take fifteen minutes in bad traffic with a pleasant stroll surrounded by greenery, with minimal exposure to vehicles (with a single road-crossing on Stroudley Road).

The Northern part of Brighton Greenway has three sections:

This runs from the lower part of Stroudley Road along the western edge of the original Goods Yard site, which was overhung by the Locomotive Works. Proceeding up from the road, one passes along the route of the goods line. On your right are the square pillars that originally supported the overhanging extension to Brighton Works, and further along on your left is the original brick retaining wall for the main body of the Works.

This is an ornate (and quite pretty) ironwork bridge spanning the road, which originally took goods railway traffic into and out of the site. The bridge became redundant with the closure of the goods yard, and is now a footbridge that takes the Greenway across the road. The bridge became an active part of the Greenway in 2013 after some delays, and sports the Ghost Train sculpture by Jon Mills, celebrating the history of the site.

The Northernmost section of the Greenway connecting to Preston Park

As of early 2016, this section is still on hold pending negotiations with Network Rail. Currently the Greenway terminates on the northern side of the bridge with a set of temporary steps that lead down to the New England Road pavement level.

In early 2016, the connecting Southern section of the Greenway started to be sculpted and replanted, again with a natural selection of plants, to try to get as close as possible to a countryside feel.

This newer section of Greenway creates a diagonal sloping route from the high station platform level all the way down to the lower level of Stroudley Road, with the rest of the Greenway continuing from the opposite pavement

Where the Northern section of Greenway is decorated with sculptures celebrating Brighton Locomotive Works, the Southern section's decorations are themed to reflect the "new tech" industries that have since set up home in Brighton, and which are being encouraged in the area, especially at New England House, whose tenants include WiredSussex. Seating is constructed from arrays of vertical concrete blocks with different heights, producing "pixellated" contours suggestive of computer graphics.

The inspiration for this section of the Greenway was Brighton's vibrant and multicultural future, taking inspiration from the fast growing tech industry.

The sculptural seating sited across the Greenway is designed to enhance people's journey through the park. Their step-like form works with the steep change in level of the Greenway to form cliff-like structures carved from sustainable Yorkstone. The organic, dispersed arrangement of the structures are suggestive of the constant movement of people through the nearby station and the dynamic nature of the city.

At the central point of the Greenway, a small piazza adjoins the path. The piazza is surrounded by modular sculptural seating – its undulating wave-like form has been designed to organically meld with the surrounding area – making a cove-like space for social interaction.

Gabion terracing has been used to structure some of the harsher falls in the landscape. The terraces also act as planting shelves where smaller shrubs and plants are sheltered while still remaining visible.

The gabion structures that have been integrated into the landscape are filled with a variety of reclaimed materials. The eclectic mix of stone colours and tones has been chosen to lift the gabions beyond a purely structural role and enable them to contribute to the artistic setting of the park.

The Greenway Biodiversity Towers have been created in collaboration with children from St. Bartholomew's Primary School, who designed and made a number of miniature 'bug hotels' in Spring 2014. A collection of drawings of species that inhabit the site drawn by the children, and further details of the site's ecology can be accessed at www.brightongreenway.net .