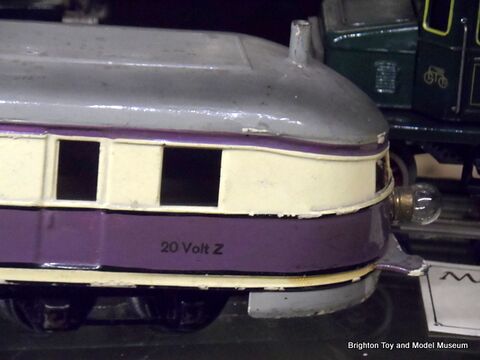 Märklin also produced a red-and-cream diesel-electric train model based on their Hamburger design, but in red-and-cream, and with an additional central section.

1936: A derivative model of a three-car diesel-electric train by Märklin, based on the Hamburger model, TW 12970/3

The diesel-electric Flying Hamburger (a.k.a. Fliegender Hamburger, or Hamburg Flier) -- officially the Baureihe SVT, and then the Deutsche Bundesbahn Baureihe VT -- came into service in 1933 as the basis of a high-speed inter-city rail link between Hamburg and Berlin, which was then reckoned to be the world's fastest scheduled train service.

For a while, the Hamburger was one of the most advanced and influential trains on the planet, with locomotive designers from all around the world visiting Germany to ride the new streamlined train, before going back home and experimenting with streamlining themselves. The fact that the Hamburger design worked and worked well, and was a high-profile success, was arguably the trigger for the rash of streamlined steam locomotive designs that then appeared in the UK, mainland Europe and the US in the early to mid 1930s.

The "Hamburger" consisted of a "pushme-pullyou" coupling of two strongly streamlined units, each of which had a rounded driver's cab at one end, followed by the engine section and an integrated carriage. A pair of these units butted together by their flat "carriage" ends produced a small, streamlined, double-ended, high-speed train that could shuttle passengers the 178 miles between the two city stations in fractionally over two and a quarter hours, and could then pick up a new batch of passengers and head straight back the other way.