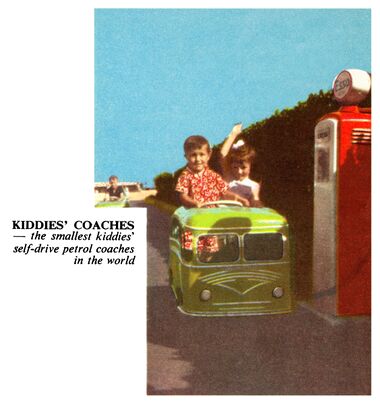 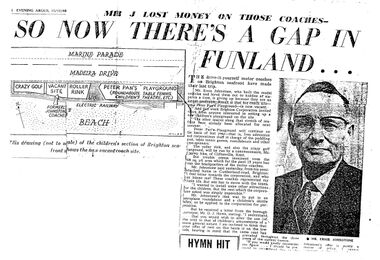 1960: Article in the Evening Argus on the closure of Ernie Johnstone's attraction, newspaper cutting from the library of Tony Johnstone [image info]

Ernest Johnstone (better known as "Ernie Johnstone") built a range of miniature motorised rideable vehicles from 1935 to 1958. The vehicles included a few fire engines, but most were Southdown Buses single-decker coaches. Johnstone also supplied a number of chassis to the coachbuilders Harrington.

Johnstone's vehicles were beautifully made and detailed, and were popular at Peter Pan's Playground on Brighton seafront. Equipped with two-stroke motorcycle engines, the coaches had a top speed of 26mph, and as working petrol-engined vehicles, were licenced and could have numberplates attached for road use – at one point, Johnstone drove one the 250 miles from London to Wolverhampton.

The miniature coach rides were very popular, and as Ernie built more coaches, other seaside resorts such as Margate and Morecambe ("The Brighton of the North") started buying them from Ernie to create their own similar attractions. Matthew Kerr of Kerr's Miniature Railway, in West Links Park Arbroath, Scotland bought a Johnstone coach in 1955, and currently still run a small fleet of two 1950s buses and a fire engine, presumably all "Johnstone"s. Eric Leyland of Morecambe bought a Johnstone coach (LUF 1) and fire engine in 1952 and operated them up until 1956.

The local company Thomas Harrington & Sons Ltd. of Old Shoreham Road, Hove, were a "coachbuilder" from 1897-1966, taking motorised chassis from major vehicle manufacturers and building their own specialised bodyshells tailored for the passenger transport market. Some of Ernie's miniature vehicles were replicas of Harrington coaches, and Harrington decided that this was such a good idea in terms of publicity that they bought a series of miniature chassis from Johnstone and built them up into full minature buses, as publicity display pieces.

Harrington built 12 miniature coaches on Johnstone chassis during 1949-50, and listed four types of coach as being available, A through D:

Rallies of Harrington-built coaches sometimes include examples of the Harrington/Johnstone miniatures buses.