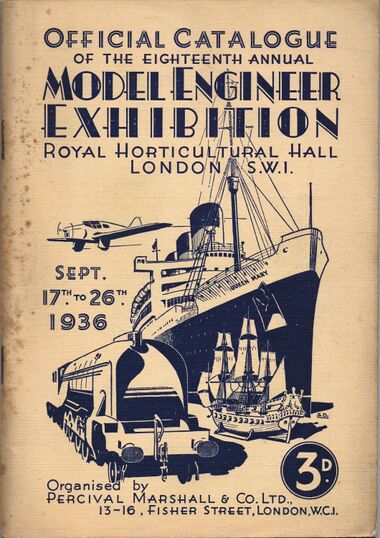 This is probably the single most valuable gauge 0 loco in the museum.

At nearly two feet long, this was one of four "big" gauge 0 electric-only models honoured in the English 1936 Märklin catalogue with the term "scale models". These four steam locomotives were selected to represent the most impressive and prestigious examples of steam locomotive engineering running the rails in Germany, France, Britain and the US, and consisted of Cock 'O' The North (for Britain), Commodore Vanderbilt (for the USA), a Mountain Etat (for France), and a streamliner (Borzig?) (for Germany).

By 1939 (perhaps due to the rise in German nationalism and the growing possibility of war) , the two German and French locomotives remained in the German catalogue, but their two British and American siblings had been withdrawn. 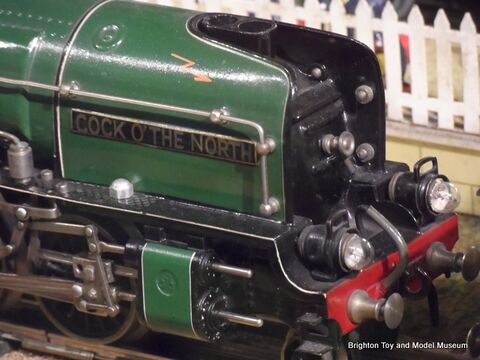 Märklin Cock O' The North model, 1937, detail. Note Märklin's yellow zig-zag "lightning" arrow signifying that it was an electric model, and the Märklin "bicycle" logo inside a circle, stamped into the drive cylinder casing

This heavy-duty express LNER loco ran Scottish passenger services through the Highlands between Edinburgh and Aberdeen from 1934, and was the first of six P2-class locomotives (#2001-#2006) designed to deal with the difficult route, which required high traction without excessive weight, and had previously been serviced with a pair of locomotives per train.

The design was inspired by French success with 4-8-0 configuration locomotives on some similarly difficult French routes.

The Doncaster P2 Locomotive Trust currently have a project to rebuild an entire working replica of the P2 Cock O' The North locomotive, although this will probably be in the revised "Fat A4"/"Fat Mallard" style rather than the more distinctive "winged head" smoke-deflector configuration usually associated with COTN.