The tentative identification of these figures as being by Heinrichsen of Nuremburg is based on their having belonged to the same owner as the "Battle of Murat" set, which was definitely produced by Heinrichsen (we have the box). Heinrichsen specialised in large "flat lead" battle scenes such as this ... however, military sets were also a popular subject material for other makers, so the identification is currently provisional – it seems quite likely, but we don't currently have other supporting evidence.

The figures are distributed across a couple of well-lit glass shelves in Arch Four. One shelf shows the attacking Vikings, the other shows the burning church, with the villagers fleeing on foot and on horses, taking their animals and carrying as many of their possessions as they can. 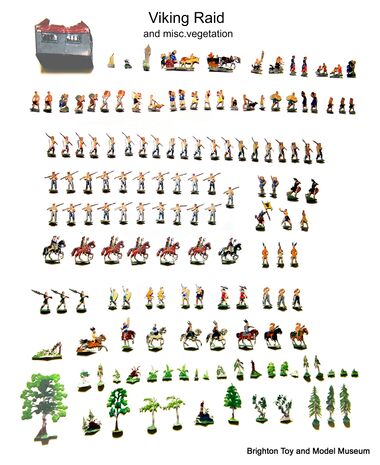