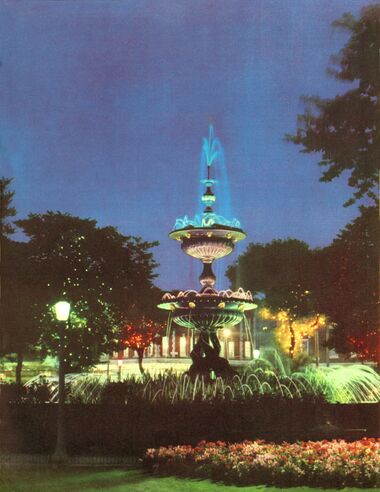 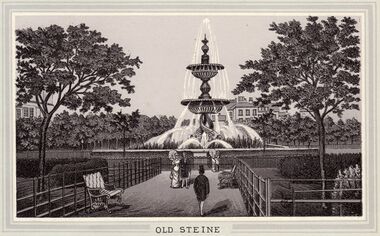 The Victoria Fountain is in the centre of Old Steine Gardens' "southern enclosure", and consists of a dark (black?) circular pool with a circular central basin raised above it by three intertwined dolphins, and a second basin and then the fountainhead mounted above that.

The Victoria Fountain was brought into existence by Sir John Cordy Burrows (1813–1876) who, disappointed in Brighton's decision not to erect a commemorative fountain to mark the coronation of Queen Victoria in 1837, decided to mount a fundraising campaign himself that culminated in the fountain being officially inaugurated in 1846.

Burrows, who was later elected Mayor of Brighton three times, brought in architect Amon Henry Wilds (1784/1790 – 1857) to design the fountain, with the dolphins being created by sculptor William Pepper (1806–1887). The fountain's castings were produced by Brighton's Eagle Foundry, and the surrounding gardens were also laid out by Burrows.