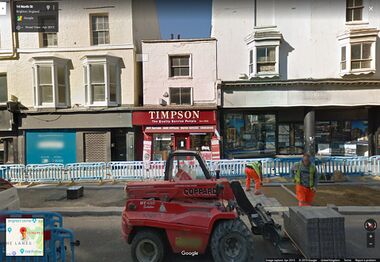 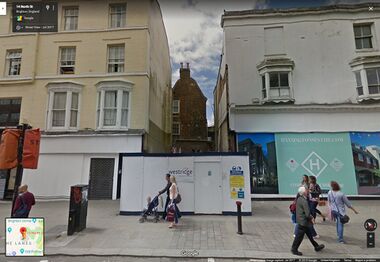 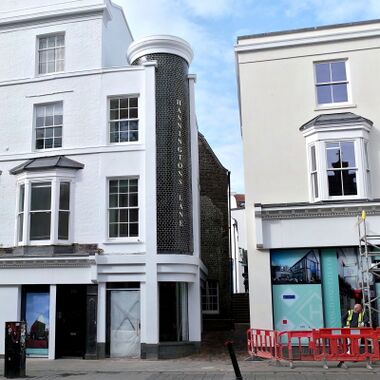 April 2019: Entranceway rebuilt and open to the public, with some final work continuing [image info]

Timpsons, at 15 North Street, was reckoned to be Brighton's oldest functioning shop until its demolition some time after 2013, in order to create a new passage to Hanningtons Lane and The Lanes, via a new path alongside Puget's Cottage.

The demolition of Timpsons created some controversy.

The building had been hacked about by successive owners, had the top lopped off, had been turned into part of the Hanningtons department store, and at some point looked as if the ground floor frontage might have been completely replaced with a pair of plate-glass windows and a plain central doorway, with no decorations or embellishements, that looked as if it could have been installed at any time between the 1920s and 1950s.

The surviving building seemed to consist of three large rooms, one per floor, with the staircase taken out and moved to the back yard to create more floorspace for the shop. The first and second-floor rooms each had a single front-facing window, and there were supposed to be some surviving details and metal furnishings. The upper storey and original roof were gone, and replaced with a flat or flattish roof (not visible from Google Streetview).

The overall effect (from the front) was of a bog-standard newsagents-style single-unit-width shop building with a rather nasty bare white upper frontage, that looked as it if had been knocked together really cheaply in order to fill a gap, and where the builders had skimped by not even bothering to give it a proper roof. In reality, the "listing" says that the upper frontage was covered with "mathematical tiles", a local architectural quirk almost unique to Brighton and the surrounding area, which would have been genuinely aesthetically pleasing and architecturally interesting ... if the things hadn't been repeatedly painted over so many times over the years that you could no longer see what they were.

Prior to 2013, there seemed to be no interest in saving or preserving anything of the building: to be of interest one would need at the very least to strip back and clean, and potentially disassemble and remount the mathematical tiles, and the remaining interesting features of the other floors were not accessible to the public, unless one reinstated the internal staircase, in which case it would no longer function properly as a shop, would probably need to be turned into a heritage site, and would then lose its claim to being Brighton's oldest continuously-functioning retail premises. While the listing said that the site had interesting pre-1840 brick roadwork and drainage, this was at the back of the shop, between it and Puget's Cottage, and would again not be visible unless one removed the shop.

In the end, that's what happened: the shop was removed to create a new entranceway to the Lanes, the route in "swerved" to the right into the adjacent building to take it around' Puget's Cottage, and a "Tower"-type structure was built into the East side of the resulting void to keep the width of the space reasonably consistent with the width of the new pedestrian space passing the side of the Cottage.

It's perhaps a measure of the last-minute nature of the consideration of the building as being important that we refer to it as "Timpsons". Timpsons (keycutting, shoe repairs etc), although the last resident of the building, only came to the site comparatively recently, and the company doesn't obviously have any particularly strong links with Brighton: they are a multinational chain store with over a thousand largely look-alike shops.

Assigning a reference name of "Timpsons" to the listing of the 15 North Street building was also rather historically short-sighted, as Timpsons now have a new replacement shop at number 50 North Street, and (as of April 2019) have at least five other shops in Brighton and Hove. This means that the descriptions "Timpsons, in Brighton" and "Timpsons, on North Street, Brighton" are unhelpfully ambiguous as geographical references.