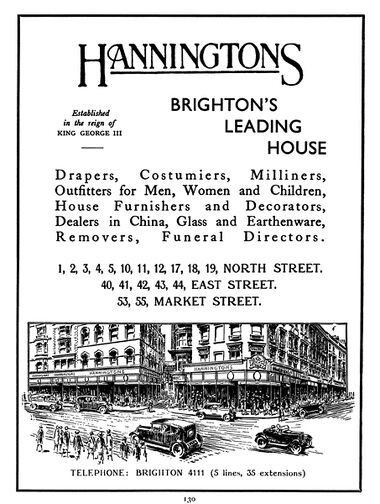 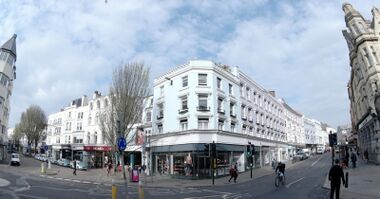 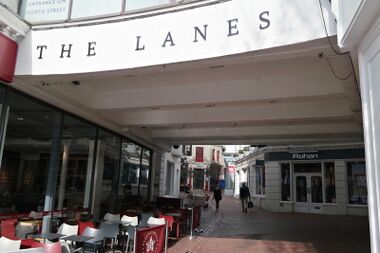 Bridged-over entrance to The Lanes, East Street, alongside Harrington's Corner. This is in the gap between buildings shown in the previous 1935 illustration. [image info]

Hanningtons (1808-2001) was a massive department store almost opposite Pavilion Buildings, on North Street, East Street and Market Street, popularly known as "the Harrods of Brighton". It finally closed in 2001, having been a Brighton institution for almost two hundred years.

The original North Street shop opened in 1808, and started an ongoing process of enlargement and expansion in 1814 that continued through the Twentieth Century. In the 1860s architect William Russell created a common "look" for the set of buildings and shop units, making Hanningtons look more as if it had been created as a purpose-built department store building.

The buildings are still in place, and are now used for a variety of other shops. In 2019, Habitat moved into one of the North Street pavement front units, and the back of the building was redeveloped to create Hanningtons Lane. 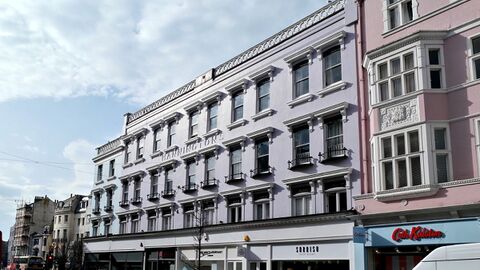 "HANNINGTONS" lettering on the main department store building on North Street, centre (zoom in for a better view) 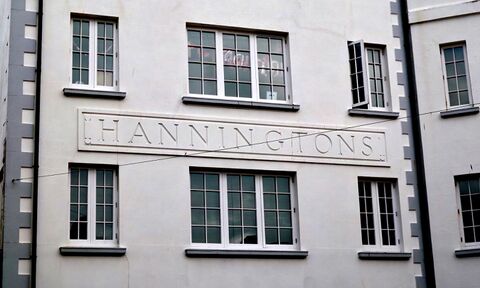 "Hanningtons" signage, on the back of Hanningtons Department Store, facing South, into The Lanes

The problem with Hanningtons was that it was just a huge, vast area, and of course there was increasing competition with the bigger stores, with Woolworths, all these sorts of places, competing on a much cheaper scale than Hanningtons, 'cos Hanningtons, it was regarded as the exclusive shop of Brighton, it was THE place to shop.

Gradually what happened in the 1970s was that because they couldn't justify the space, they started letting bits out to other shops.

But it WAS noticeable in the Seventies that it wasn’t the Hanningtons that it used to be, as a lot of franchises were coming in, mainly cosmetics and that sort of thing, but it was still a fabulous place, it really was. And to wander round there, with all these different shops, all joined up, was quite amazing. Historically, it was quite interesting, just to look at the inside of the building.