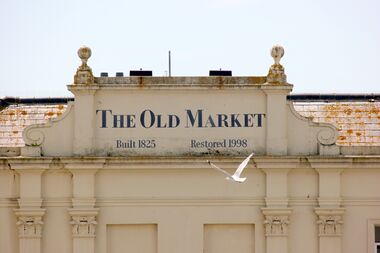 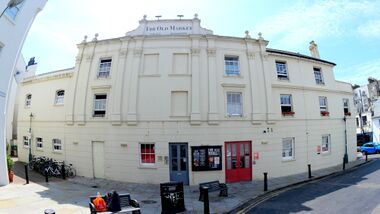 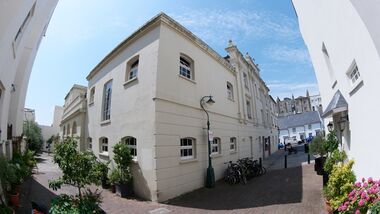 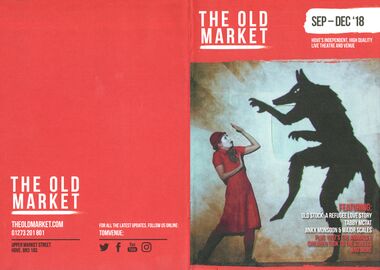 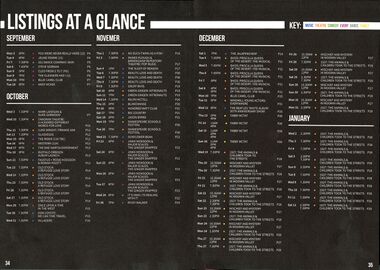 The building was originally constructed between 1826 and 1828 by Charles Busby, as a market space to support his 1820s Brunswick development. The original concept for Brunswick Town was that it was to be an exclusive, independent and "free-standing" development with its own services and administration, gardens, and seafront, and that people living there would never have to venture outside its boundaries if they didn't want to – giving it its own grand market in a large dedicated building being part of that plan.

However, the marketspace alongside Brighton Town Hall was then further developed (including the Floral Hall), making the (small) extra journey time to central Brighton more attractive, and making it more difficult to justify having a second market nearby.

The Old Market building then became a riding academy and stables for a while, and was then a warehouse until rewiring and refitting in the 1980s allowed it to be turned into a theatre space.

The building is very easy to miss for the casual visitor, as it's not on a major road. Its current main entrance faces North along Upper Market Street, which connects to Western Road. If you're travelling along Western Road and don't happen to look directly south down Upper Market Street as you pass by, you'll miss it.

This North-facing facade is supposed to have been a subsequent addition ... the original entrance seems to be the East-facing side of the building, which has a narrow courtyard with potted greenery, behind the decorative Waterloo Arch (white-painted rendering, on brick), which faces onto Waterloo Street. The Arch is a landmark for people using Waterloo Street, but it's not a hugely busy street.

The building is a lot bigger than it first appears. While it has an impressive "front" face when first encountered, many Brighton buildings have an impressive facade with not so much behind them: The Old Market's building goes back as far as it is wide: the building is essentially square as seen from above.

In Waterloo Street, the first thoroughfare in Hove running from the sea to Western Road, will be found Dupont's West Brighton Riding Academy, a most complete establishment of its kind.

... Waterloo-street, and extending thence southward along the middle of the last-named street for a distance of one and a half chains or thereabouts to a point opposite the centre of the gates which form the eastern entrance to the building known as Dupont's Riding School, ...

Media in category ‘The Old Market’