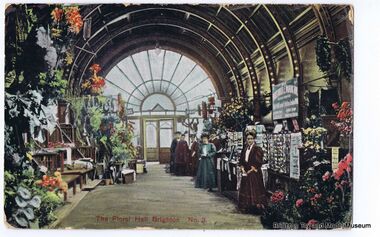 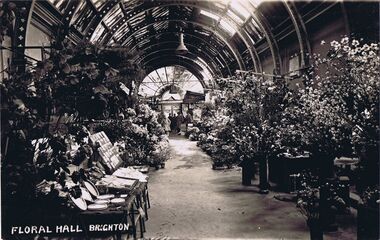 The building dated from 1900-1901, when borough engineer Francis May redeveloped the market area and built a long hall with red brick, cast iron and glass, and a distinctive "sunburst" semicircular set of end windows. The building had areas for selling vegetable, fruit and flowers.

The building closed in 1938 and was then demolished, although the facade lasted a while longer.

In the principal part of the building to which we have come, vegetables and fruit are sold wholesale, on Tuesdays, Thursdays and Saturdays, and the neighbouring streets are filled with carts laden with garden produce to be disposed of in the same way. Adjoining the wholesale market is the Floral Hall and Arcade, which vies in its gorgeous colour effects with Covent Garden.

The other Corporation Market is on the neighbouring beach, and is for the sale of fish, which are disposed of by "Dutch Auction".