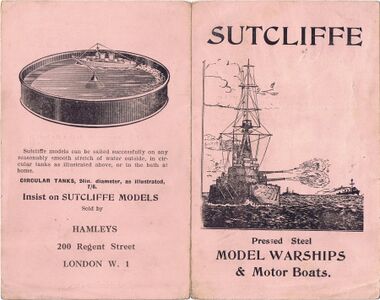 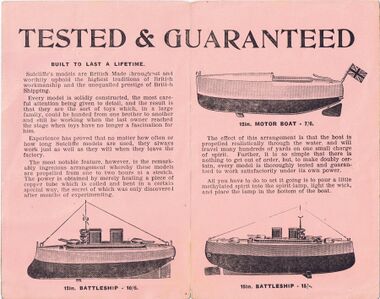 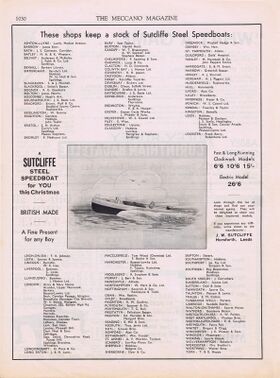 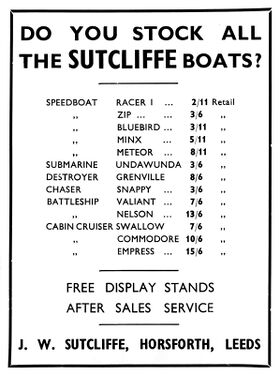 1939: Games and Toys trade advert, "Do you stock all the SUTCLIFFE boats?" [image info] 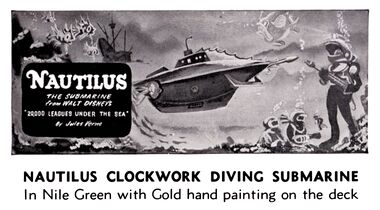 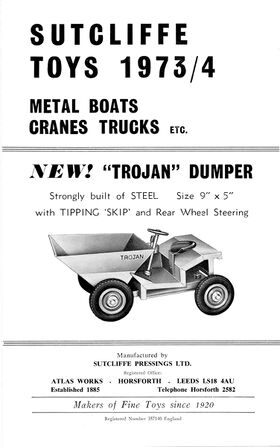 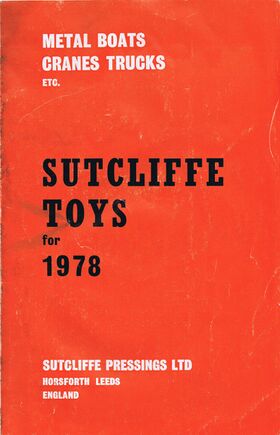 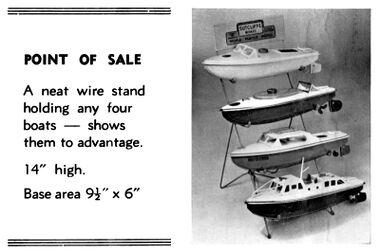 Sutcliffe Pressings Ltd. was run by John W. Sutcliffe, who started out in business in the 1890s, opened a small dedicated site for production in the 1900s producing a range of odds and ends, including oil cans, and produced his first model boat in 1920.

With the success of the boat, Sutcliffe Pressings used their niche expertise in producing leakproof metal joins to create a limited but successful range of further tinplate boats and submarines, and got the franchise to produce model submarines loosely based on the Nautilus design used in Walt Disney's live-action film of Jules Verne's "20,000 Leagues Under the Sea".

Sutcliffe didn't completely turn their production over to toymaking, and continued producing other miscellaneous items until 1983. 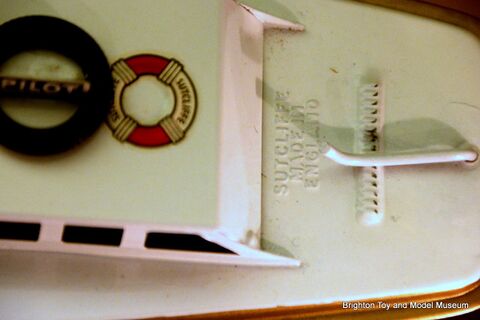 
BUILT TO LAST A LIFETIME

Sutcliffe's models are British Made throughout and worthily uphold the highest traditions of British workmanship and the unequalled prestige of British Shipping.

Every model is solidly constructed, the most careful attention being given to detail, and the result is that they are the sort of toys which, in a large family, could be handed from one brother to another and still be working when the last owner reached the stage when toys have no longer a fascination for him.

Experience has proved that no matter how often or how long Sutcliffe models are used, they always work just as well as they will when they leave the factory.

The most notable feature, however, is the remarkably ingenious arrangement whereby these models are propelled from one to two hours at a stretch. They power is obtained by merely heating a piece of copper tube which is coiled and bent in a certain special way, the secret of which was only discovered after months of experimenting.

The effect of this arrangement is that the boat is propelled realistically through the water, and will travel many yards on one small charge of spirit. Further, it is so simple that there is nothing to get out of order, but, to make doubly certain, every model is thoroughly tested and guaranteed to work satisfactorily under its own power. All you have to do to set it going is to pour a little methylated spirit into the spirit-lamp, light the wick, and place the lamp in the bottom of the boat.

Half a mile at a stretch!

Two Miles for a Penny

Wouldn't you like a model boat which will travel half a mile at a stretch without attention, and which never gets out of order?

Sutcliffe models are really wonderful toys because they will travel two miles at a cost of only one penny and will go on working for year after year without ever getting out of order. There is no engine, no boiler, no clockwork, no electricity – but they go! The method of driving is a mysterious and most ingenious arrangement and will puzzle and interest you – and your Dad, too! You must have a Sutcliffe model for Christmas.

Strongly built of light pressed steel plates, with guns that move and can be "trained" on the enemy, and beautifully finished in two colours of cellulose enamel. Supplied in strong cardboard box complete with full instructions.

Every Model is Tested and Guaranteed

Great strides have been made recently in speedboat design and construction and it is now recognised that the use of steel helps considerably to give the necessary strength which is required for the most powerful speedboats, such as "Miss England II".

The manufacturer of Sutcliffe Boats has recognised this fact and has therefore introduced a magnificent range of Speedboats, the hulls and decks of which are made entirely by British labour of best quality British steel plates.

These new models are fitted with powerful clockwork motors which enable the boats to go "all out" at full racing speed without any fear of the hulls splitting or warping.

BRITAINS BEST BEAT ALL OTHERS

The following 33 files are in this category, out of 33 total.