The model is in its original box (which has faded to orange-and-white only).

The toy was made in the UK by Sutcliffe Pressings Ltd, circa 1954.

Box artwork: "NAUTILUS, The Submarine from Walt Disney's '20,000 Leagues Under the Sea', by Jules Verne" 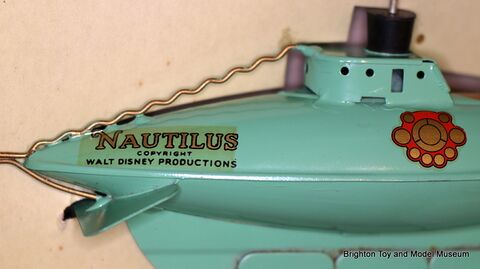 The Disney film was released in 1954, starring Kirk Douglas as a sailor, James Mason as a convincing Captain Nemo, Paul Lukas as Prof. Pierre Aronnax, and Peter Lorre as ... the sort of character that Peter Lorre usually played.

The film was well-received, for its cast, for the excellent production design work for the submarine and for its giant animatronic squid. The Submarine designed by Harper Goff was for many the definitive interpretation of Jules Verne's fictitious underwater craft, with a heavy cast-iron look, and a ridge of spikes and protuberances along its spine that made it look like a monstrous cyberpunk mechanical fish, but which had a practical purpose in allowing the sub to ram the underside of military ships and rip through their skins to sink them.

The film won an Oscar for "Best Art Direction - Color 1954", but since Goff didn't have a union card at the time, the award named his assistant John Meehan, instead.

Goff had prompted Disney to make the feature film when he was tasked with planning a short underwater "True Life Adventures" nature film with the same name, and instead decided to present a set of storyboards outlining a feature film of the Verne book.

Typically for a Disney film, Goff's name didn't appear in the film's credits as Art Director, following Mr Walt Disney's feeling that the "magic" of the company's products would be spoiled if it named the artists involved, with each film instead being "signed off" with the company logo ... which happened to be his own (WD's) name.

Before "20,000 leagues" and Disney, Harper Goff had already had a Hollywood career with Warner Brothers, as a set designer on a number of WB films, including Casablanca (1942).

Goff became one of the main Disneyland designers (or "imagineers"), and had become involved with the Disney company through a combination of his being a model railway enthusiast and a freakish piece of good luck – Goff made a pilgrimage in 1951 to the famous Bassett-Lowke model shop in central London to try to buy a model train, only to find that another customer in the shop was trying to buy the same train ... the other customer being Walt Disney. A conversation inevitably ensued, Disney found that Goff had studied art, illustration and design (and had been trusted by the US Navy to paint their ships in camouflage during WW2), and hired him – possibly because, having chosen exactly the same locomotive as Walt, Harper clearly had impeccable taste.

Goff went on to design the "other" famous film submarine of the period, "Proteus", for "Fantastic Voyage" (1966), and went on to be Art Director of the 1971 "Willy Wonka and the Chocolate Factory".