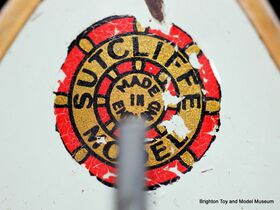 The boat is around 24cm long (plus rudder), and has a bulbous bright red hull, pale grey superstructure an a gold rim where the upper and lower pressings join.

The rear upper hull is embossed "SUTCLIFFE MADE IN ENGLAND" and there's a circular red, black and gold transfer on the upper surface just behind the prow, designed to look like a lifebelt, with the same words.