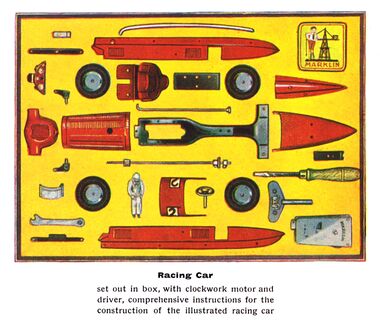 Marklin's 1930s Racing Car Construction sets consisted of a pair of models based on the Mercedes-Benz W25 racing car, available in the two German racing colours of red, and silver (for white).

Although the W25 was superceded by the W125 in the 1937 racing season, the W125 only had very minor styling changes to its bodyshell. 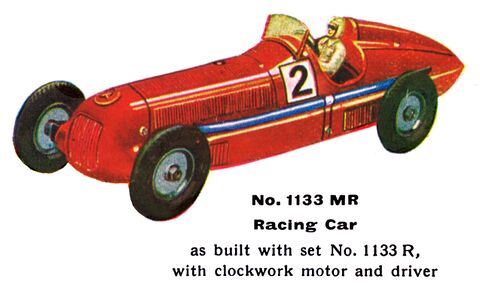 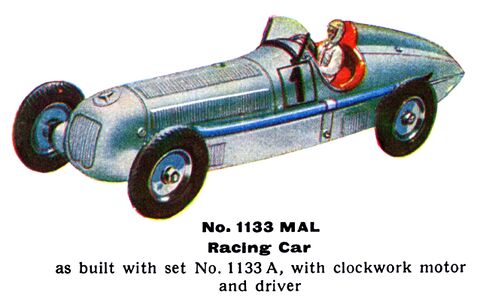 Who has not had the desire to be present at one of the great international motor races at Brooklands, the Nüburg Ring or one of the other great tracks? Most of us can only form a picture of these great sporting events which hold the whole world in their grip, from newspaper reports, wireless commentaries and films.

However we follow these races it must become evident that inventors, engineers and racing motorists are striving year after year to bring the motor vehicle to ever greater perfection, to make it faster, safer and more economical.

The racing cars themselves, real masterpieces of modern science, excite the interest not only of technicians but also of boys who follow the great sport. As a matter of course they master the various technical expressions, and know even the smallest details of the various cars and their intrepid drivers.

In order now to add to the knowledge of young racing enthusiasts and to make them even more familiar with the construction of modern motor cars we decided to produce this racing car construction set to build a very accurate model of a modern racing car.

The Mercedes W25 was a successful racing machine of the mid-1930s, replaced by the superior W125, which looked almost identical. Supposedly originally raced in bare aluminium as a weight-saving solution after a car had failed its preliminary weigh-in by a single kilogram, the silver cars, representing the German racing colour of white, captured the imagination of the German press, who referred to them as "Silver Arrows".