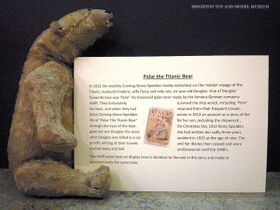 The story of Polar the Titanic Bear [image info] 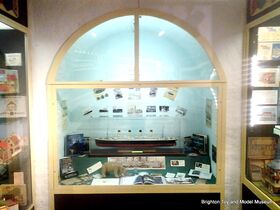 The RMS Titanic is one of the world's most iconic ships, partly because she was launched as the World's largest and most luxurious ocean liner, but mainly because only a few days after she set out on her maiden voyage from Southampton to New York on 10th April 1912, she struck an iceberg and sank (on April 15th) with the loss of 1,517 lives.

Titanic (1912) was built for White Star Lines as one of a set of three Olympic-Class sister-ships, the others being the RMS Olympic (1911-1935) and the HMHS Britannic (1914-16). The third ship was originally intended to be named Gigantic, but this was presumably felt to be too similar to the name of its ill-fated sister-ship.

The Olympic was completed first, with the Titanic and Britannic both benefitting from further modifications to the original design. The Britannic never got to be a luxury liner, as it was pressed into service as a hospital ship with the outbreak of WW2, and was sunk by a mine.

The main identifying characteristic of the Titanic and her sister ships is the four yellow funnels. In fact, the four-funnel configuration was a slight piece of sleight-of-hand, in that the White Star's new ship was going to be competing with existing four-engined, four-funnelled liners from Cunard, and although it only had three engines and three boilers (and therefore only needed three furnace chimneys), the designers added a fourth "dummy" funnel for show, and used it for ventilation.

The Titanic had three propellers, and it's widely assumed that while the two flanking propellers had three blades, the central one had four (the standard configuration of its previous and subsequent sister-ships). However, White Star were still experimenting with different prop configurations, and the Britannic appears to have initially flirted with having a three-blade central prop that was then switched back to a four-blade version as used on the earlier Olympic This has suggested some uncertainty (in certain quarters) as to whether the Titanic, the "middle ship", was really launched with a four-blade central propellor, as is generally assumed.

The museum hosted a temporary "Titanic" display during the first half of 2012, to coincide with the anniversary of the ship's launch (and its sinking).

The Titanic's size, recognition factor and historical impact make the ship an obvious choice for a modeller interested in building a scale replica of a large ocean liner, and there have been a few large kits aimed at the more ambitious kit-builder. There is also a third-party market for high-detail enhancements to these kits (such as finely-etched brass fittings).