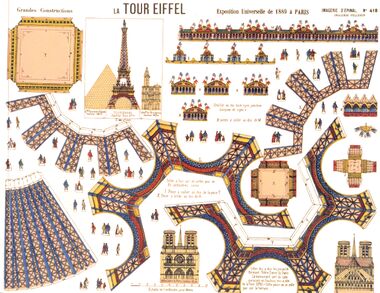 Jean Charles Pellerin (1756-1836) was the son of playing-card maker Nicolas Pellerin, who had moved to Épinal, Vosges, France. Jean Charles took over "Fabrique de Pellerin" in 1773, started "Imagerie Pellerin" in 1796. The illustration and "image library" aspect of the business expanded into "Imagerie d'Epinal" in in 1796, which generated a massive catalogue of printed sheets, with Jean-Charles' own son Charles Nicolas Pellerin (1827-1887) introducing the range of cut-out card model designs that the company is now mostly remembered for.

"Imagerie d'Epinal" sheets were initially hand-pressed from wooden blocks, and then coloured by hand using a round paintbrush with stencils for the different colours. Colour lithography started to be used in around the 1850s.