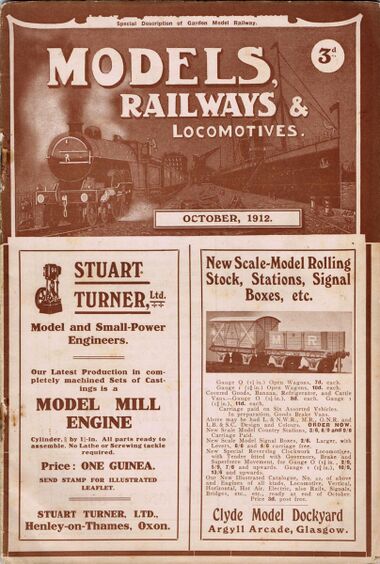 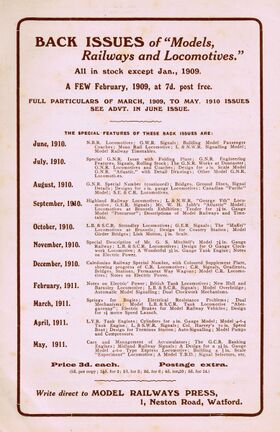 "A monthly journal devoted to the construction of Mechanical Models of all kinds."

The name change was the result on internal tensions within the community composed of the original founders, article contributors and readership as to what the focus of the magazine ought to be. Originally founded by W.J. Bassett-Lowke and Henry Greenly as a "model railways" magazine, its emphasis had shifted as W.J concentrated on his editorial control of The Model Railway Handbook, and Greenly wanted to extend the reach of the magazine more towards drawings, plans and descriptions of "real" railway equipment, while also leaving open the possibility of allowing coverage of other types of engineering and engineering models that weren't railway-related. 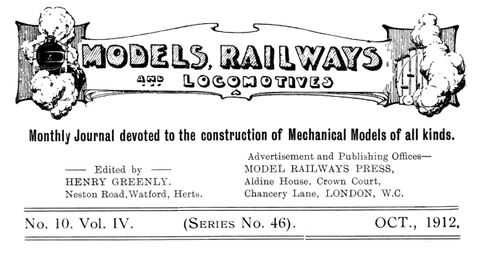 Continuity was emphasised by the new title only differing from the original by the addition of a letter "s" and a comma, and the magazine initially had an almost unchanged cover, with the same black-and-white illustration of a steam loco and carriage steaming away from the viewer into a junction.

The new title and mission statement probably still wasn't ideal (for instance, model railway constructors might be interested in building trackside scenery and buildings, which might not be obviously "mechanical"), and the magazine eventually became merged into the Everyday Science title.

"With reference to the Referendum, we may say that the "non-objectors" outnumber those who would rather not have seen the change by about three to one. However, our readers are unanimous in endorsing our determination to keep to mechanical models. In the case of locomotives and carriages, where the description of the latest in "possible prototypes" is useful and interesting to all railway enthusiasts, we will endeavour to mould the information is such a way that it will prove of the maximum value to our readers in their model work. To this end we have held over the second instalment of Mr Allen's tank engine article, as we are awaiting some official drawings to accompany the same."