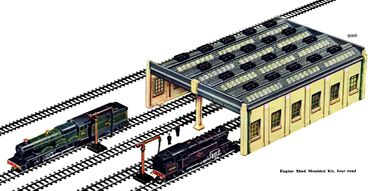 The range of Hornby-Dublo plastic moulded "self-assembly" station buildings appeared in the late 1950s, with the appearance of the new electric two-rail track.

Although they were marketed as "kits", the new plastic trackside buildings were not intended to be primarily aimed at the sort of model kit-building enthusiast who would glue, paint and painstakingly detail Airfix-stye models ... these were simple slot-together items whose parts were already moulded in their final colours, and were meant to be quickly assembled in a similar way to a piece of Ikea furniture.

Supplying the pieces unassembled meant that the cost could be lower, the boxes smaller, and the product less liable to be damaged in transit.

With the exception of the small Platelayer's Hut 5040, the pieces modelled modern cast-concrete Art Deco-influenced buildings, in cream with grey roofs and additional "detail" components such as windows, doors and drainpipes in green plastic (although the Goods Shed had a metal crane that looked as if it might have been originally designed to be mounted on a metal railway wagon). Most of the pieces seemed to be fairly strongly influenced by the designs chosen for the earlier cast-metal stations.

The Engine Shed Kit came in two versions, two-track and four-track, and it was possible to buy the two-track version and later buy the extension kit that added an extra roof section and a supporting clip to turn it into the four-track version.

The largest and most impressive piece (the City Station Kit) wasn't available until the early 1960s, a little after the main range was launched, and replaced the pre-war wooden City Station Kit (which presumably wouldn't have been economic to build in cast metal).

Although the plastic stations appeared to make the metal predecessors obsolete, Meccano Ltd. continued to supply both ranges in parallel for a while, the reason being that the new plastic stations had been designed to have lower platforms to take into account the fact that the rails on the new two-rail electric track were significantly lower than those the older three-rail track (which had had a built-up metal "bed"). If someone used the new stations with the older three-rail track, the new platforms would be too low with respect to the doors on passenger carriages.

This meant that the newer plastic stations were marketed as being primarily two-rail compatible, while the metal stations continued to be sold for the benefit of three-rail Dublo owners.