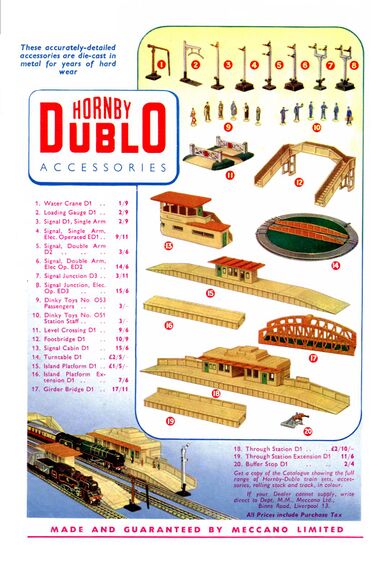 1958 full-page advert: "These accurately-detailed accessories are die-cast in metal for years of hard wear" [image info]

Although the pre-war wooden model railway buildings were functional, well-designed and quite respectable, the fact that they were obviously made out of wood, and that the apparently-unsanded wood-grain was occasionally quite easily visible at cutaway regions such as station steps was probably a matter of some distress to Mr Hornby – they were not products designed to showcase the technical prowess of an engineering based toy company, and can probably be considered as a "stopgap" measure intended to get Hornby-Dublo up and running as quickly as possible

The original wooden buildings didn't reappear when Dublo arrived back on toyshop shelves after the war, and Meccano Ltd produced a new range of "proper" station buildings made of robustly-painted diecast metal.

The Through Station and Island Platform both had a central platform section with the station building or passenger shelter, flanked by a pair of ramp sections. The ramp sections were separate diecast pieces that clipped into place, so that it was possible to unclip them and insert additional platform extension pieces to produce longer and more impressive platforms. Having the end-ramps as separate pieces probably also made the platforms easier to cast and kept the the retail boxes down to a reasonable size.

The new metal range didn't include a replacement for the large wooden terminal building set.

THIS month we are able to give details of some splendid new accessories now available for Hornby-Dublo railways. These are among the finest models of their kind that have yet been produced, and they form a vast improvement on the corresponding items included in the Hornby-Dublo range in pre-war days. The new accessories are respectively the Through Station, the Island Platform, and the Signal Cabin.

There are several features common to each of the new accessories. In the first place they are thoroughly modern in design and style of finish, and each is well in keeping with the other items of The Hornby-Dublo range. Each is made up of high-grade precision die-castings, a form of construction that gives a degree of neatness and solidity that is practically unobtainable by any other method of manufacture. Modern building style is followed, neat, simple and practical in arrangement; the modelling of each accessory represents concrete construction and a light and pleasing finish is the result. The general effect is shown in the accompanying illustrations.