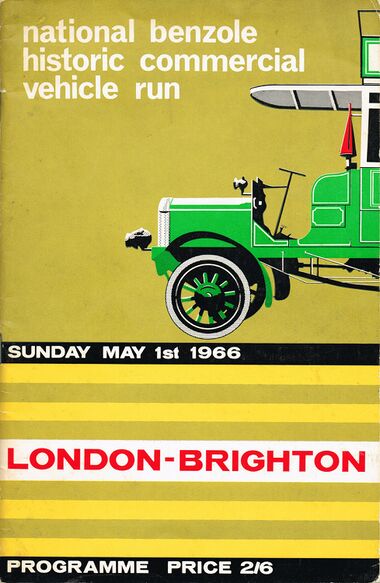 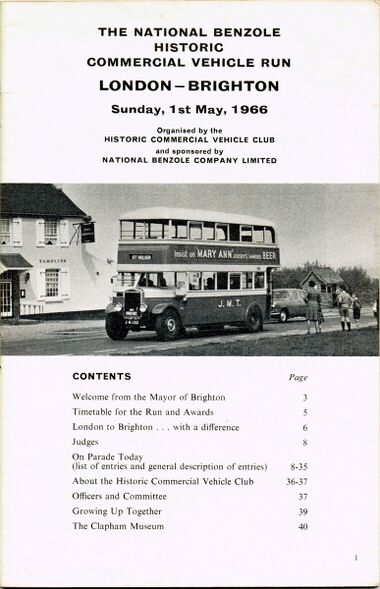 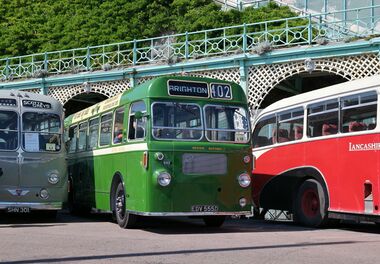 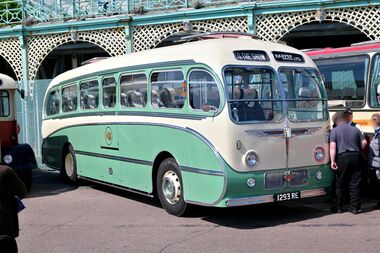 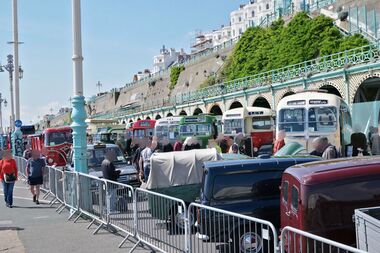 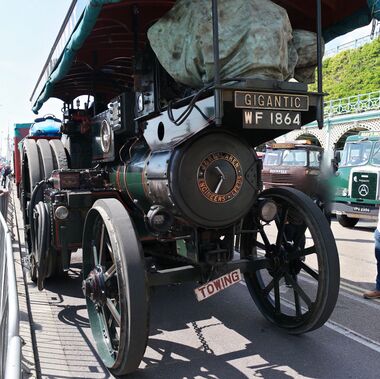 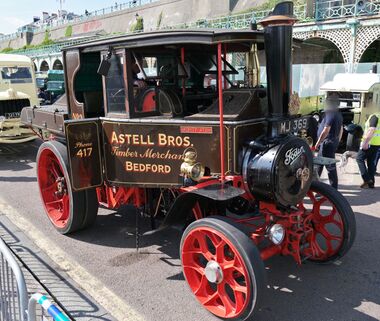 The Historic Commercial Vehicle Society's annual London-to-Brighton Run takes place in the spring (currently on a Sunday in early May), and finishes at Madeira Drive, Brighton, where judging takes place.

Featuring steam and diesel lorries, trucks, taxis, traction engines and buses and coaches, it is the "commercial vehicles" counterpart of the annual London to Brighton Veteran Car Run that takes place in autumn/winter.

London to Brighton ... with a difference

Today some one hundred and fifty commercial vehicles will set out on our annual jaunt from London to Brighton. These are not just ordinary commercial vehicles, for none are less than twenty-one years old and many have far more years behind them than that. A few of the real veterans have even celebrated their fiftieth birthday, and many others are rapidly approaching it. In almost every case, the vehicles you will see are the last remnants — sometimes even the sole survivors — of once popular types of vehicles, saved from the scrap heap after years of hard work only by the sheer love and enthusiasm of their present owners.

A trip from London to Brighton is a simple event for the motorist in his modern car; a journey he can accomplish in little over an hour if traffic conditions are right. But to most of these old-time commercials the run presents something out of the usual. For the oldest, with their solid tyres and slow speeds, it is a very real challenge, and even for the "middle-agers" the going is by no means always easy. But, despite the temperamental uncertainty of old machinery, the hard driving and the hours of polishing and cleaning needed beforehand, the Brighton Run is tremendously popular with members. Indeed it has become the highlight of the Historic Commercial Vehicle Club's activities in the short space of only three years. It must be emphasised that this is by no means a race to see who gets to Brighton first, although there is plenty of competition after the vehicles have arrived there, to select the best in each class.

Invaluable help for the London to Brighton Run is readily given by the Police, Brighton Corporation, the Museum of British Transport, the R.A.C. and many others. In particular thanks go to National Benzole without whose sponsorship the Run may not have been possible at all.

A tremendous amount of voluntary hard work has also gone into organising this rally. The result is a living display of vintage commercial vehicles that is almost certainly unique anywhere in the world. We hope you enjoy it.

How did it all begin? The start was really in November 1956 when a letter appeared in The Veteran and Vintage Magazine suggesting a rally of old commercial vehicles. After all, why not? Car rallies were always a popular thing and, in the heavier field, the steam traction engine was beginning to attract large crowds in various parts of the country at summer weekends. The commercial vehicle should, in theory at least, become just as popular. On the second Sunday in July 1957, the suggestion of a commercial vehicle rally bore results when thirty old timers turned up at Beaulieu Abbey, a beautiful venue provided through the courtesy of Lord Montagu of Beaulieu. Here was mooted the idea of a Club especially for commercial vehicle enthusiasts.

Early in 1958 the Historic Commercial Vehicle Club was formed and Lord Montagu was elected our first Chairman. Amidst much publicity, the Club started off in a big way with two rallies in 1958, at Leyland and Southall. Rallies have been held each year since at various places throughout the country and have included, since 1962, the most popular of our activities — the London to Brighton run. Other activities were soon established and today include well-attended indoor meetings every month in London, a regular news-letter, a special insurance scheme for vehicle owners, assistance in choosing which old commercial to own from a long register of same, an annual dinner and dance, etc. During the recent years a number of provincial groups have been established and are mostly making slow but steady progress.

Membership quickly reached a healthy figure with supporters from a surprisingly wide range of occupations. Coach and lorry owners are naturally included in our ranks and so are many whose occupations link them daily with commercial vehicles. But for many others the Club and its activities mark a drastic break from their day to day existence. For lawyers, salesmen, clerks, pressmen, architects and many others the historic commercial vehicles provide a welcome change of thought.

The Club itself has acquired a few particularly interesting commercial vehicles ready for the day when it can establish its own museum. First of all, however, space is urgently needed where we can store vehicles in security from the elements and from hooligans; preferably covered space. For the biggest problem of all confronting almost everyone in the H.C.V.C. is finding somewhere to store the vehicles, particularly the bigger ones. A special Museum Fund was set up three years ago and is making steady progress; at the moment it is being used to finance our first storage building just outside Lowestoft, Suffolk. As time goes on we shall look for further sites in various parts of the country as well as pursuing our original aim of starting our own commercial vehicle museum. Money, of course, is the main problem and any donations, large or small, will be readily welcomed by the Museum Officer.

Our position was greatly consolidated when we joined forces on the 1st April, 1962, with the Vintage Passenger Vehicle Society and the London Vintage Taxi Club, and now we are the only national club to cater for commercial vehicles of all types. Our membership has reached about 350 and the number of vehicles owned by members has, believe it or not, exceeded the 300 mark. From the tiniest of Ford Model-T vans to the largest six-wheeled double deck bus all classes of commercial motors are included in our ranks representing the products of well over fifty different manufacturers.

If, after seeing this rally, and reading about the H.C.V.C., you wish to join, you will certainly be very Welcome. The Assistant Treasurer, whose address is below, will be pleased to send details of the Club and our future programme of activities. The annual subscription is only 21/-.

If you know of any interesting vehicles that possibly merit preservation, we should be grateful if you would contact the Club's Chairman. It may be just the vehicle someone is looking for. For any other matters concerning the Club the person to write to is the Hon. Secretary. His address is given below.

"Historic commercial vehicles may not at first blush make the same romantic appeal to the public that is associated with the Veteran car. Perhaps an appropriate analogy would be the comparison between the carthorse and the hackney." Thus once wrote our late patron, Sir Henry Spurrier ... and though we agree that the hackney may be more handsome than the carthorse, we in the H.C.V.C. feel that the latter is just as lovable. Perhaps, after seeing our rallies in the flesh or in film you will begin to think so too.