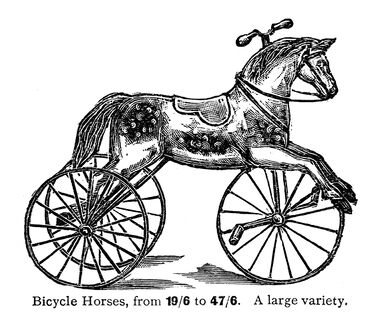 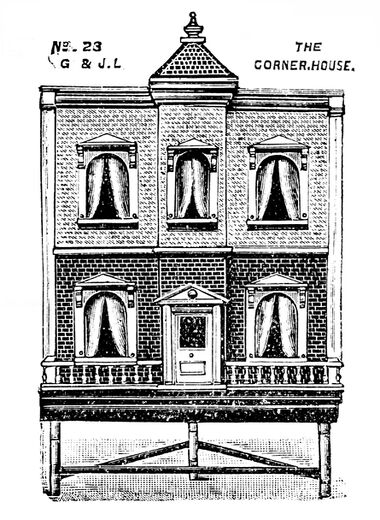 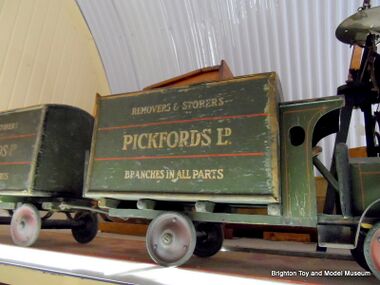 The company G&J Lines (George and Joseph Lines, 1876-~1931) produced one of Britain's best-known Nineteenth-Century ranges of wooden rocking-horses, and with Allen & Co (which they owned) also produced dollhouses, carts and prams.

The company started using the "Thistle" trademark in 1910, and the new North London works that they moved to in 1913 (in Down Lane, Tottenham) was called Thistle Works. 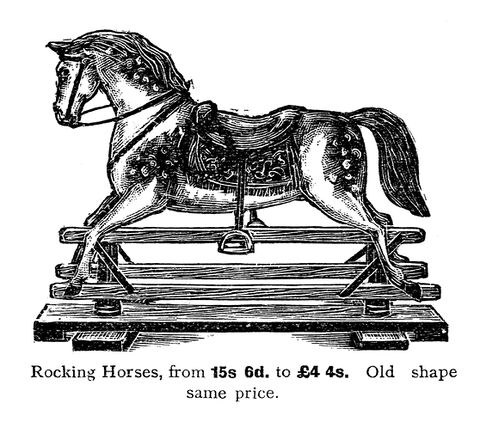 In the Nineteenth Century, British toymaking was mainly carried out in small anonymous workshops and homes, with pieces made individually in people's homes and sold on the streets as penny toys, or in small workshops, with more extravagant toys for the wealthy often being produced by jewelers, engineering companies, or individual craftsmen.

This meant that most local toymaking in the period was necessarily "low-tech", using cloth, wood and other basic hand-craftable materials, with little or no mechanisation. An exception was lead-cast models, which (after a craftsman had sculpted the mould) could be used to churn out mass-produced castings that would then be hand-painted ... but in general, toy companies were rare. Industrial toy production using metalworking techniques had started in earnest in Southern Germany, but with the German factories producing mass-produced metal toys for the international market, there wasn't much point in UK companies even trying to enter that market until after WW1 (apart form Meccano Ltd, whose construction toy system was patented in 1901, and couldn't be copied). One medium that could be mass-produced for toys was paper and card, With Benjamin Pollock's toy theatres selling well, and Deans Rag Book Company starting in 1903 to extend the printing process to cope with cloth toys, books and kits.

G&J Lines, however, needed substantial workshop space to make full-size hand-carved wooden horses to sell to saddlers (before they branched out into making wooden rocking-horses), and with Allen & Co making prams, and the crossover encouraging the company to make wooden sit-on-toys with wheels, G&J Lines found themselves with a number of manufacturing sites dotted around London, apparently making them the largest toy manufacturing company in the UK.

Nowadays, G&J Lines is best remembered for being the company that spawned Lines Brothers, owners of the Tri-ang trademark.

The birth of Lines Brothers

George Lines retired in the 1890s, leaving his brother Joseph Lines to run the company, and Joseph groomed his four sons, Arthur, William, George and Walter, to eventually take over the company. This "next-generation" plan faltered after World War One, when Walter, Arthur and George returned from the War with new ideas about manufacturing and markets. The appearance of early tanks on the battlefield had made it clear that the days of horse-based warfare were numbered, and it didn't take much imagination to realise a possible parallel with the future of the family's wooden-horse-based business. The War had been increasingly fought with industrially mass-produced guns and equipment, and the Brothers returned with a determination to move away from wooden hand carved horses towards metal wheeled toy vehicles.

This idea apparently didn't go down too well with Joseph, and three of the brothers, Arthur, Walter and Will, struck out on their own to found their new company, Lines Brothers, in 1919. Lines Brothers, headed by Walter Lines (who had by this time become a well-respected figure ion the toy industry in his own right) became a next-generation toy manufacturing company, combining the brothers' in-depth knowledge of the toy industry with a determination to break away from some of the restrictive attitudes that had been in place in their father's and uncle's company. Lines Brothers became a huge company, largely based on the brothers' experience of the day-to-day running of a toy business, and their experience of what had worked well (and what hadn't worked!) at G&J. Lines Brothers went on to become the biggest toymaker in the UK, even including companies such as Meccano Ltd. ... but the experience that had built Lines Brothers had been largely acquired at G&J.

Without a viable "succession plan", G&J Lines closed shortly after the death of Joseph Lines in 1931, and the company and its product lines, brandnames and assets were then taken over by Lines Brothers, reestablishing the family business' continuity, so that Joseph's sons did (in a sense) end up running the business after all ... but as a part of their own multinational company.

Having acquired their parent's product lines, the brothers preserved and enlarged them, and a significant part of the new company's catalogue was devoted to ranges of prams and "ride-on" toys.

As a further nod to the company's origins, when Lines Brothers set up a Canadian offshoot company in the 1940s, they called it Thistle, and used a logo with a red "Triang-style" triangle, but with a central image of a thistle head in memory of the G&J Lines logo.