A boxed "Gift Set 41" from Corgi, consisting of a blue and grey Scammell Carrimore Mark IV car transporter with a red tilting automatic-coupling Ford H-series cab, and six cars, opened, with lid to one side.

The Corgi "Carrimore" transporter came in various configurations, with different cabs. This one was sold individually as Model 1138 in 1966 and (unlike some of the earlier Bedford-cab Carrimores aimed at the UK market) had a later, more highly-detailed Ford cab that tilted forwards to show even more detail. Some of the Corgi transporter gift sets had transparent box lids, this one was opaque. 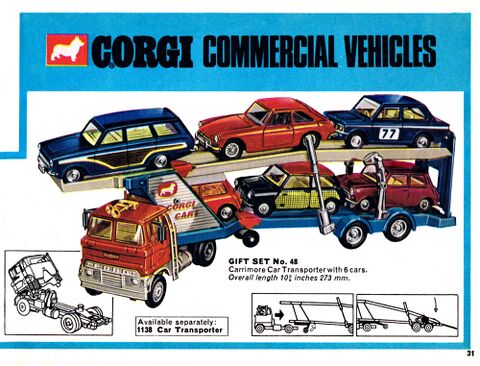 1968: catalogue image for another 1138-based Gift Set, No.48
Retrieved from ‘https://www.brightontoymuseum.co.uk/w/index.php?title=Carrimore_car_transporter_gift_set_41_(Corgi)&oldid=30958’
Categories: