The class is known as the "Schools" Class because all forty locos (numbered 900 - 939) were named after British schools (with Hornby's gauge 0 number 900 "Eton" being quite famous in model railway circles). The locos were based on the earlier Lord Nelson and King Arthur Classes, and were stocky and powerful engines designed to pull heavy loads while still fitting onto short turntables. Number 915 (1933-1962) was named after Brighton College.

The broad boiler, truncated length and limited number of wheels combine to give these locos a slightly "toyish" appearance, with the result that toys and models of these locos are not always given the credit for accuracy that they deserve by people unfamiliar with the Schools Class - the original locos really did look like that!

This locomotive was kindly presented to the museum by Allen Levy on 15 May 2013, at the party to celebrate the 150th anniversary of the birth of Frank Hornby. 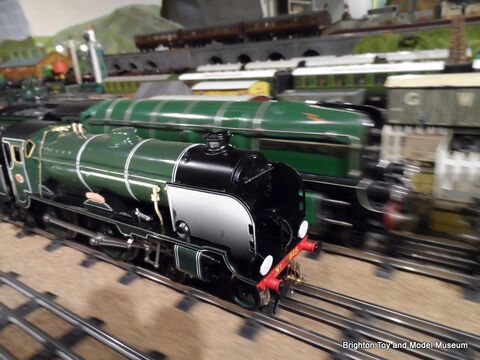 The "Brighton" loco, in action on the layout after the presentation

ACE Trains currently make a range of gauge 0 Schools-Class locomotives with different configurations, the most startling being a ficticious extension of the "Schools" naming to include a "St Trinneans" (sic) loco named after the chaotic girls school "St Trinians" depicted in the famous Ronald Searle cartoons. The "St Trinneans" loco is bright pink with white wheels, and instead of the more usual sober blue-suited fireman and driver, is manned by two schoolgirls.