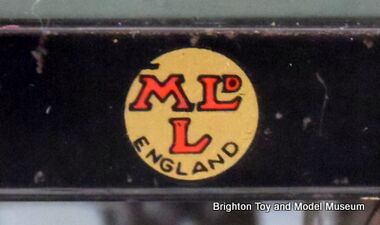 These pieces are referred to as "MLDL" because where most Hornby gauge 0 railway items proudly bore a "Hornby Series" sticker, these earlier pieces had a simpler round sticker with "Meccano Limited, Liverpool" abbreviated to just four letters: "M LD L".

The construction of these very early pieces is usually different, with deeper wagon bases. The very early "Type 1" trunions holding the wheels don't amount to more than simple black angled blank plates with rounded ends (as opposed to the ornate, elaborately-pierced "Type 2" wheel supports that can be seen in the illustrations in the 1925 Hornby Book of Trains).

Construction typically uses standard Meccano nuts and bolts, due to the early concept of treating the Hornby Trains and rolling-stock as extensions of Meccano, compatible with the Meccano system. This idea turned out not to be the great selling-point that it was originally hoped to be, and the rethinking of the range that coincided with the switch to "Hornby Series" stickers also coincided (at least approximately) with the switch to using simpler, cheaper and more conventional factory-style construction methods, such as punched slots and folded metal tabs.

If an "MLDL" piece is also embossed or painted with the initials "LNWR" then this is yet another suggestion that the piece is likely to be early (even to people who aren't familiar with the minutiae of Hornby wagon construction), since the London and North Western Railway ceased to exist on the First of January 1923, when it became part of the new London Midland and Scottish railway (LMS).

It's difficult to come up with exact dates when these early features were phased out, since the company would probably have continued selling its existing old stock rather than scrapping it, and might also have continued making some of the old "nuts and bolts" wagons for a while rather than have someone assigned immediately to design replacements. However, these typical MDLDL features don't seem to have appeared on any "new" items introduced after about ~1923.