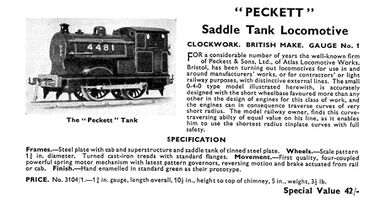 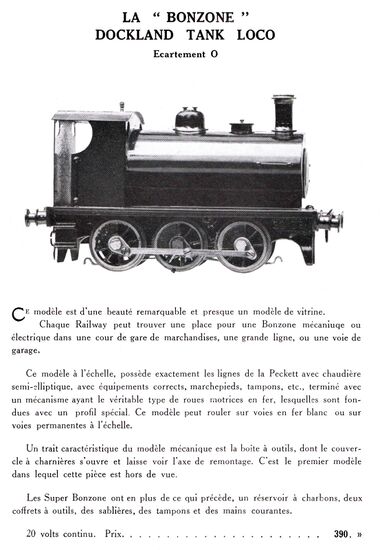 Peckett and Sons were specialist locomotive builders that concentrated on the production of 0-4-0 and 0-6-0 "saddle tank" locomotives for dockwork and other industrial use.

The company operated from the Atlas Locomotive Works, Bristol, and started out as Fox, Walker and Company (1864) before being taken over by Thomas Peckett in 1880.

Fox and Walker had already been successfully building tank locomotives as well as steam trams and other steam engineering, and Peckett's found themselves not just supplying British collieries, docks and large factories, but also exporting specialist locomotives to countries whose geography might require locomotives with unusual characteristics, and who might not have a well-enough developed indigenous loco-engineer infrastructure to easily make their own repairs – like Peckett's industrial customers, they wanted locomotives that could "get by" with minimal maintenance, and that could have standardised replacement parts shipped out if needed, which wouldn't have to be hand-tailored fit an individual loco.

Although other loco works manufactured tank engines, these establishments were often owned by individual railway companies and produced locomotives for the companies' own use. Peckett's industrial customers often had specialist requirements, would generally be working their engines very hard and (unlike the railway companies who had teams of expert loco engineers on hand) mighrt be giving their machines minimal maintenance.

The saddle-tank configuration was a more complex shape than the simple "box" side-tanks used on the main railways, but could store more water and allow the locos to work harder for longer with fewer planned breaks for refilling, which might be important in a quarry or construction site where track layouts might be awkward and one couldn't always guarantee to always have a convenient water supply within easy reach. Where the main passenger railways' engineers were continually fine-tuning and experimenting with loco classes, resulting in a lot of heavily specialised repairwork, Peckett decided to use standardised parts wherever possible to make servicing easier and cheaper, and with the basic design and component-set fixed, could then focus on ascertaining the particular needs of a customer and tailoring a locomotive to suit.

Peckett's also operated a "semi-bespoke" manufacturing model - their emphasis on a limited number of basic starting designs allowed them to part-build engines between orders so that when a new order did come in, they wouldn't always have to build it from scratch - they could often take a generic part-built engine and finish it to the customer's specifications, so that the customer wouldn't have to wait so long between ordering and receiving their new custom-tweaked loco.