A mid-sized Trevithick 1804 Steam Locomotive model on a plinth, built from an Airfix Museum Models kit. 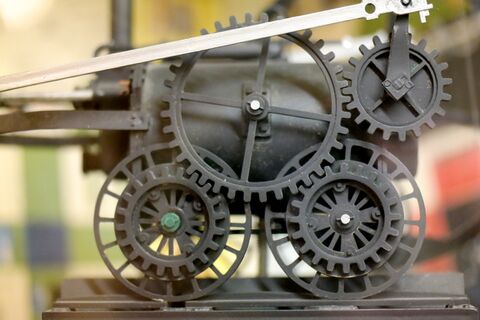 The subject of this kit is the Pen-y-darran locomotive, the general design being similar to that of Trevithick's single cylinder high pressure engine for driving machinery.

The Pen-Y-Darran engine, as it is often referred to, made its first run on February 11th 1804, undertaking several journeys between Merthyr Tydfil and Abercynon. It weighed 5 tons and was capable of hauling a load four times its own weight at a steady 5 m.p.h. However, it proved too heavy for the cast iron track which frequently fractured.

The model used to occupy the top shelf of the "Micromodels Buildings" display until a reorganisation, and now sits in the museum office.