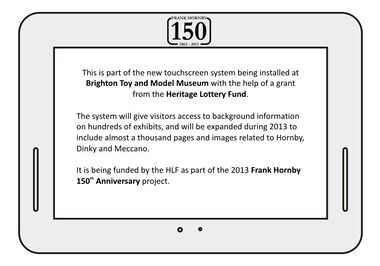 Promotional text and graphic used for the launch of the new tablet touchscreen system, at ModelWorld 2013 [image info]

In February 2013, the museum installed a set of touchscreen tablets around the museum, paid for by the Heritage Lottery Funded Frank Hornby 150th anniversary project.

The screens default to showing a simple frame with a set of buttons along the left edge that provide fast access to the museum's website, blog, and information system. A search box at the top of the screen activates a keyboard for typing in search terms.

Specific searches work much better than vague questions, so "Flying Scotsman", "4472", "Doll house" or "Biplane" should give good results.

The button with blue text activates the tablet's voice recognition feature. You should then hear a voice asking "What are you looking for?", after which you can speak a search word of phrase into the tablet. If the system doesn't recognise your voice, it will give you the option of trying again, or you can type in the search term manually.

The system also works very well for numbers, which can be useful for finding information on a specific locomotive model from the number painted on the side of its cab.

The touchscreens are Samsung Galaxy Tab2 10.1 tablets in custom housings, currently running the Android 4.11 operating system. The screens' content and the voice recognition system are connected to the internet via our new wifi network (also paid for by the HLF).

This software can continue to be developed, with new features influenced by usage and visitor feedback, and since the embedded content is "live", it updates whenever our web resources change.

The touchscreen housings have been designed by Museum staff around a "construction" theme (to fit the FH150 project), with the acrylic panels designed using CorelDraw software, and cut from perpex sheet using the laser cutter at BuildBrighton.

Although the installed Kiosk software is very difficult to bypass, small children seem particularly adept at bypassing security and installing games on the tablets! We're currently waiting for a third-part version of the "KitKat" release of Android to become available for the hardware, which will include proper parental controls. Meanwhile, the tablets are set up with a "rude words" filter.