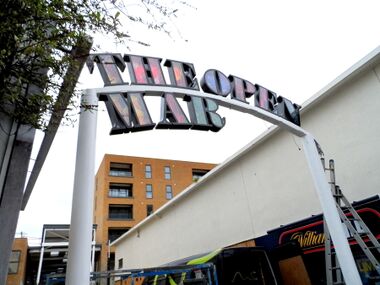 2014: The start of the reconstruction of the Open Market, incomplete signage ("London Road" end, February). This space now looks much nicer! [image info]

The Open Market (a.k.a. Brighton Open Market) is a covered market filling Marshall's Row, a shortish road linking London Road with Ditchling Road, alongside The Level.

The Market was reconstructed and relaunched in 2014, partly in response to demand for an independent market and to help keep Brighton's market culture alive, and partly as a response to concerns that London Road might be in danger of deteriorating into a generic high street filled with pound shops and chain stores.

The relaunch of the Open Market gave London Road a boost by making the road more interesting to shoppers – there are now significantly more shops and stalls in the region that aren't just clones of retailers that can be found on any other town's high street.