The City Beautiful - A vision of the New Brighton (Sir Herbert Carden, 1935) 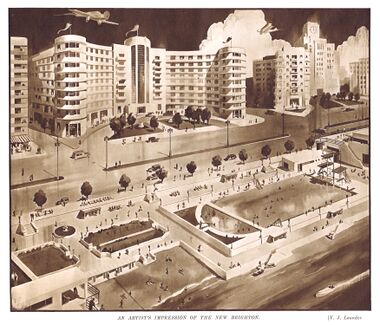 The City Beautiful: A vision of the New Brighton was an essay on the future development of Brighton, written by Sir Herbert Carden and published with artist's visualisations in Brighton Corporation's May 1935 programme for the town's Royal Jubilee celebrations.

The City Beautiful: A vision of the New Brighton

The City Beautiful: A vision of the New Brighton, by Sir Herbert Carden J.P.

TWENTY-FIVE years hence . . . Brighton a vast and noble city stretching from the Adur to the Ouse, with unrivalled amenities of sea and sunshine to make it one of the most favoured residential resorts of the world. Surely this is not too glowing a picture to paint of a town that for a hundred years or more has built up a proud reputation as “The Queen of Watering Places”.

Brighton can justly claim that title to-day. Its air has not changed, and is still a tonic unequalled anywhere. We still have the wide rolling Downs around us, and the sea, and the sun’s health-giving rays. But we cannot afford to stand still. Times are changing, traffic is increasing by leaps and bounds. The greater portion of the town is out-of-date. Its buildings are not suitable for modern requirements, and many of them, to tell the truth, are extremely ugly and have no pretensions to architecture at all. Where does the future lie? What shall we make of it, and how best to use its grand air, its wonderful sea front, its unrivalled situation?

Town planning must play its part. We have secured a spacious green belt of land right round the town, some 11,000 acres including parks. We have now to develop the central areas and rebuild them on modern, up-to-date lines. Imagination, courage and enterprise to carry through enormous schemes bristling with difficulty at every turn will be necessary if Brighton is to become that great city for which nature and natural resources have so richly equipped it. We have become an important residential centre for the more fortunate of London’s citizens. The change in Brighton and Hove in the past twenty-five years has been brought about principally through their close proximity to London. Road transport has made amazing developments during that time, and the electrification of the railways has brought the health-giving sea breezes within daily reach of the city worker.

Brighton should become, in the next twenty-five years, the finest residential city in the world. There are unmistakable signs that our town is developing towards this end, but wise municipal government, and careful and well-considered planning, will be very necessary if we are to reap the full advantages of the present trend.

To the older residents in Brighton and Hove, the lines along which this development must take place will appear startling. First we must plan our new City, the City of Brighton. We must bring under one municipality all that area lying between the Adur and the heights above Newhaven. The City of Brighton will stretch from the Adur to the Ouse.

The harbour of Shoreham will be Brighton’s industrial harbour. The harbour at Newhaven will be Brighton’s port to the Continent. Hove will no longer be a separate town – it will be part of the greater city. We have already planned Western Road and North Street as great shopping centres, worthy of any city, and we must now plan the other parts of our new city to fulfil their natural objects.

The Sea Front will become the great promenade of the city. The barren stretches of beach which mar the view seawards must be turned into sunken gardens, with bathing pools. The cheap stalls must disappear, with all that makes for ugliness. Parking places for motor-cars must be found in the side streets, and the Front cleared. Hove has shown us that this is possible.

We must plan the cultural life of our city. The University of Brighton must be brought into being. What finer site is there in the world for a centre of learning than the open spaces which surround Roedean? High on the cliffs, in fine bracing air, we can build a university that will add lustre to the fair fame of Brighton. Victorian Britain was charming – to the Victorians. The twentieth-century Brighton must be symbolic of its new birth.

The gibe that Brighton has “a Queen Anne Front and a Mary Anne back” must be refuted. In place of the gaunt, basemented houses, badly converted into so-called flats, stately new buildings to house the new residents must arise. Embassy Court – that modern block of ten-storey flats designed by that talented young architect, Mr. Wells Coates – has shown us the way to build for the new age. Along our water front new buildings such as this must come, and with their building will disappear many of the mean streets that lie behind the present Front. The wide arterial road surrounding Brighton must be completed and developed to carry away from the Front and the residents much of the through motor traffic. The fruit and vegetable market will be removed to the back of the Grand Parade. The meat market and the ice storage depot should go on the site adjoining the central railway, and much of the traffic diverted back to the railway. Queens Road and Terminus Road want entirely rebuilding, and a noble boulevard constructed from the sea front to the station extending up Terminus Road to Seven Dials. The widening of North Street is long overdue. North Road should also be widened in order to provide quick means of access to the Central Station from Patcham and Lewes Road districts.

The incorporation into Brighton of the western districts, Portslade, Southwick, and Shoreham means more to these districts than any other part of Brighton. A stately boulevard, 120 feet wide, should be driven from the boundary of Hove to the Norfolk Bridge. Nearly all the buildings on the south side should be swept away, leaving an open view of the sea, the canal, and the harbour. Many of the buildings on the north side should be demolished and replaced with something worthy of such a thoroughfare. Large open spaces and parks should be secured for these districts, and particularly all the Downs at the back should be purchased and become public open spaces. Five thousand modern houses for the working classes should be built and let at reasonable rents, say 10s. per week inclusive, for the workers in these western districts, and many of the workers taken out of the crowded central areas of Brighton and Hove.

A new and adequate bridge, free of tolls, should be thrown across the river at Shoreham, replacing the inadequate toll bridge, and the new bridge would, of course, be thrown across the railway, doing away with the railway crossing here as well. This would immensely help communication with the whole district right though to Worthing, and would also provide better means of access to the new Municipal Airport. The proposed new bridge across the canal at the locks would be provided out of public funds and not by private subscription. A much better and more adequate bridge could be provided in this way. A bridge should also be thrown across the railway at Portslade Station, doing away with the terrible level crossing at this place.

The financial resources of the new Brighton would be so great, the annual rateable value being not less than £3,000,000, that it would enable schemes of development and improvement to be undertaken which are utterly impossible for small isolated urban districts. We should get one police force instead of four or five, one health service, one education authority, with far better educational facilities for the whole district. There would be considerable economy in local administration.

The eastern districts, Peacehaven and Newhaven, would, of course, be improved out of all recognition. Peacehaven possesses one of the finest sites in the world, and with moderate expenditure, a great coastal drive could be extended to Newhaven, would pass on to join Eastbourne, which should extend its boundaries to join on the new Brighton. Worthing also would extend to join the new Brighton at the Adur, and the horrible mass of nondescript buildings which disfigure the Front would be all swept away. Brighton possesses one of the finest sites in the world. The County Council of East Sussex exercises a crippling influence on the whole of the coastal areas. As a matter of fact, how can Chailey or Lewes, or Cuckfield, govern these coastal areas? They really don’t want to be bothered with them. The area of the new Brighton should extend inland to enclose the ridge of the South Downs. Lewes would be enlarged; Eastbourne and Worthing the same. Parliament should, of course, delegate much greater powers to these large County Boroughs, and the remainder of the East and West Sussex County districts should be amalgamated in the one Sussex County.

The assets of the present Brighton are enormous – not less than $12,000,000. It is paying off its debts at the rate of more than £300,000 a year, which means nearly a million in three years and two million in seven years. The vast electrical undertaking could supply cheap electricity throughout the whole area, and the extremely substantial waterworks undertaking can supply an abundance of the purest water at the lowest change in England. Transport should be publicly controlled and cheapened.

What a chance lies here, if we have the courage to grasp it! What a City of Brighton we could build! Noble buildings, fine hotels, modern flats, imposing houses, great university halls – indeed a city worthy of the finest site in the empire. Shall we plan along these lines, and hand over to posterity the City Beautiful, or shall we still think of day trippers and whelk stalls as the destiny of Brighton? The decision lies largely with our Councillors. With courage and foresight they can bring this great city into being from the Adur to the Ouse; if they realize aright their vast responsibilities they will seek at once the means to bring about the happy amalgamation of areas which the scheme necessitates, not in the spirit of absorption, but in a generous spirit of co-operation in a great ideal.

We all stand to gain from the creation of this magnificent city; we all stand to lose if the present “drift” is allowed to continue. Is it too much to hope that the next twenty-five years will see this City of Brighton an ideal worthily attained? I believe the whole world is on the threshold of the most abundant prosperity it has ever known, and Great Britain and the British Empire will undoubtedly take the lead. Let us see to it that Brighton is prepared to keep its place as Queen of Watering Places.