It's overhead in Arch Four, by the 00-gauge layout. 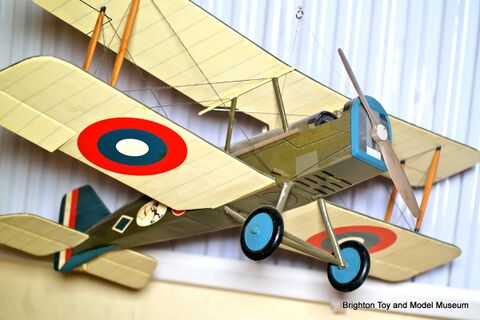 The S.E.5 biplanes and the Sopwith Camel biplanes together formed the core of Britain's air force during World War One. While the SE5a is generally reckoned to have been the better aircraft, it was let down by its engine. This limited its production numbers to begin with, with the result that there was a larger proportion of Camels than one might otherwise have expected.

In the Biggles books, Biggles flies a Sopwith Camel, and his friend Wilkinson ("Wilks") flies an SE5, and teases Biggles about how his squadron (unlike Biggles') flies "real aeroplanes".