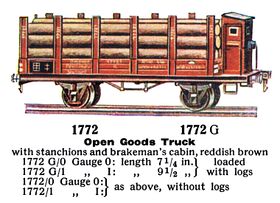 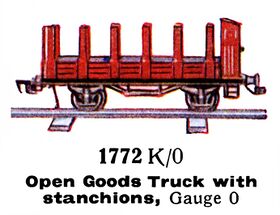 A brown gauge 0 "Rüngenwagen" - (Timber Wagon or other goods wagon with upright stanchions), made by Märklin in the 1930s, with the catalogue number 1772/0 R (the "slash-zero" indicating that it's the gauge 0 version). 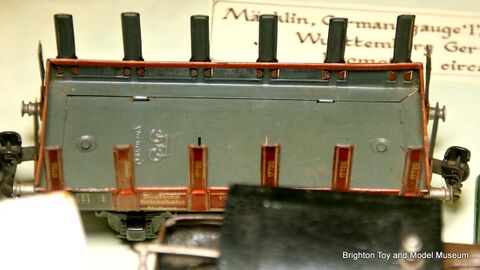 Oddly, the same wagon seems to have been issued with two different numbers: 1772/0 R and 1769/0. 1772 was the version of the wagon with a brakeman's cabin, and our guess is that since the model had its number printed on every single stanchion, the company probably had a stack of the parts left over when it started producing the "cab-less" R variant, appended an "R" to the number on the base until the stock of pre-printed parts were used up, and only then issued the revised wagon with its own number.

If one looks carefully at the 1939 catalogue image for the 1769 wagon, it's clear that the company didn't bother updating the image when they gave the product it's "proper" number – the image still shows the stanchions numbered 17720 and the base 17720 R

The wagon is marked Deutsche Reichsbahn Stuttgart, and has the catalogue number printed on each stanchion, as "17720".

The Märklin GMC "bicycle" logo is stamped into the grey base, and clearly visible on the truck bed.