A tinplate Hornby Platelayer's Hut, from the early 1930's.

The hut is screenprinted tinplate on a green base, with screenprinted red brickwork and green wooden door, and climbing plants (perhaps climbing roses) meandering up across the brickwork.

The hut has a blue flat sloping roof, and a protruding cement-styled chimney breast and chimney topped with a red chimneypot running up one side, again, with climbing foliage.

"Platelayer" is a slightly archaic term for railway track maintenance personnel, and dates back to a "pre-rail" days, when an iron-wheeled wagon would be run along a "permanent way" consisting of grooved plates set into the ground, rather than on raised rails.

During the steam era, "platelayers" would be assigned their own sections of track to inspect and maintain, and they would have a "platelayer's hut" to provide basic facilities and shelter, and to use as their base of operations. 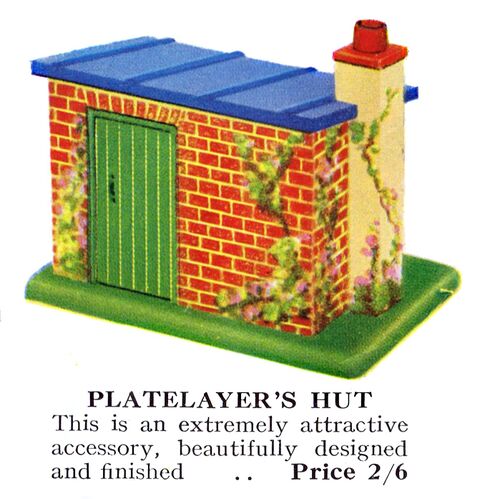