From The Brighton Toy and Model Index
Jump to:navigation, search
==This exhibit is scheduled to go on display during 2016, as part of the museum's 25th anniversary improvements==, 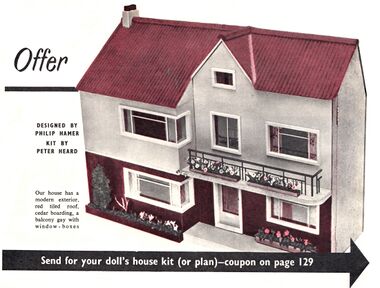 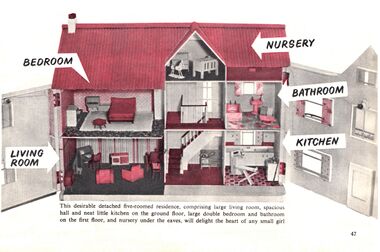 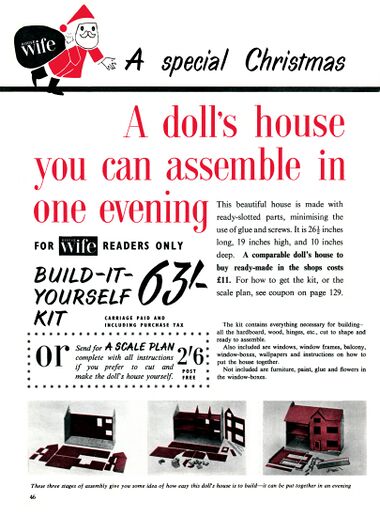 "A doll's house you can assemble in one evening" [image info]

A dollhouse designed by Philip Hamer, built from a kit that was produced by Peter Heard and advertised in the December 1960 issue of Housewife magazine.

An unusual feature of the dollhouse is the pair of "wraparound" windows on the left hand side, which go around the corner of the wall adjacent to the central front door.

"Reeded hardboard" was hardboard with a shaped surface with a series of convex "stripes, fashionable in around 1960 as a material for use in fitted kitchens. Conventional flat hardboard pinned inside a wooden frame and painted tended to look ... rather like painted hardboard, whereas panels with the fluted surface of "reeded" hardboard suggested something more complex and exotic. The use of the material for the dollhouse roof was therefore a clever way of using an available material to give a more textured appearance, slightly evocative of tiling, without requiring any additional construction work.

The kit was designed to be built with a minimum of fiddly woodworking or tools – the windowframe sections were made from rectangular "U" cross-section moulding that fitted onto the ways around the window frames, so that once the last piece of a frame was pushed into position, all four sides would tend to stay put through friction, until the glue set.

The magazine advertising says that the house could be assembled in an evening, and while this was probably technically correct, trying to assemble and decorate the house in an evening would not have been a good idea - it'd have been advisable to perhaps paper and paint the dollhouse walls first, perhaps after push-fitting the house together to get an idea of what it looked like before choosing a colour scheme, and only carrying out the final assembly after everything else was finalised. 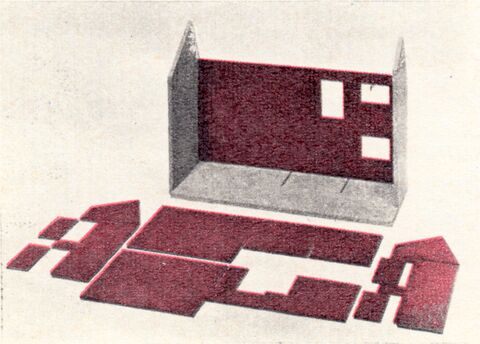 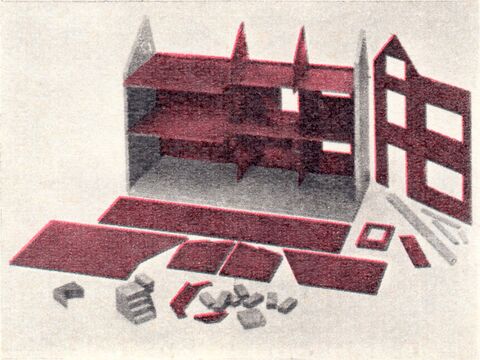 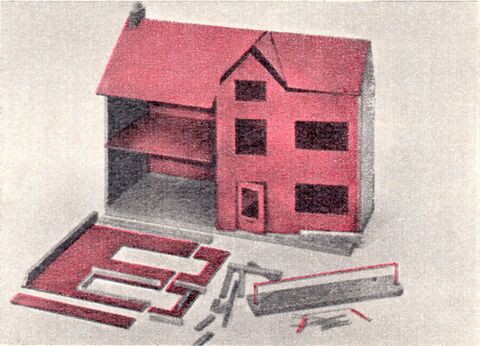 The dollhouse has been in museum storage for some time (rather longer than intended), and has now been retrieved from storage to put on display, motivated by the museum's 2016 initiative to improve our coverage of dollhouses and dollhouse miniatures.

The dollhouse was never finished, and (as of September 2016) is still missing its original windows and balcony, which were apparently never fitted. – although it has been fully wallpapered inside, with 1960s-style period patterned wallpaper, the more generic exterior "brickwork" paper was partially stripped around one corner (apparently by mice!), before the house arrived at the museum.