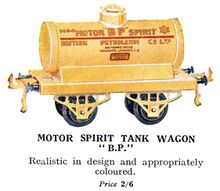 The earlier version of the wagon, 1927 [image info]

The tank wagon has a cream tank, base, buffers and "Type 3" trunions, and bare metal couplings. The top valve detail is embossed.

Although the BP Wagon had been produced practically unchanged since the late 1920s, the amalgamation of Shell and BP led to a redesigned tank wagon, which appeared in the 1937 catalogue, with the "Shell" logo on the left, the "BP Ethyl" logo on the right, MOTOR SPIRIT in large letters in the middle, over a red line, with "SHELL - MEX & BP" in smaller text underneath the line, with a small black outline "BP" logo superimposed on a red "Shell" logo.