The wagon has dull orange tank, base, buffers, couplings, and "Type 3" trunions, marked "PRATTS MOTOR SPIRIT" in black with gold outlines, above a black flash with the words "HIGH TEST". 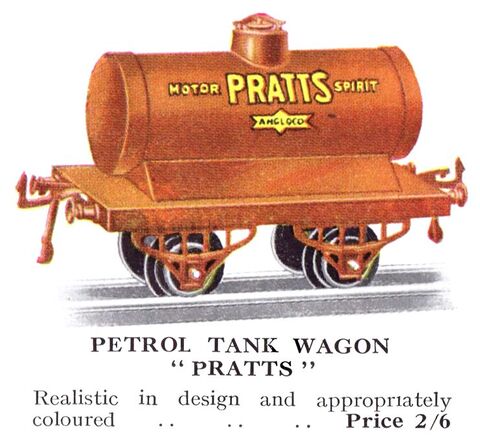 A 1930 version of the wagon, with the earlier style of trunions, gold lettering rather than black, and lettered "Angloco" rather than "High Test"

Charles Pratt (1830–1891) originally worked at a company that sold whale oil products but recognised the potential of "geological" oil, and set up a kerosene refinery (Astral Oil Works) in Brooklyn in the early latter half of the Nineteenth Century. Pratts became part of Standard Oil in 1874.