From The Brighton Toy and Model Index
Jump to navigationJump to search
==This exhibit is scheduled to go on display during 2016, as part of the museum's 25th anniversary improvements==,

An "Oilette" postcard of "Perambulator and Motor Cycle", The Queen's Dolls' House (later to be known as Queen Mary's Dolls' House), produced by Raphael Tuck and Sons ("Tuck's Postcards") catalogue number 4505-3. These postcards started to be produced in 1924, when the dollhouse first went on public display.

SERIES VI: ROUND ABOUT THE HOUSE 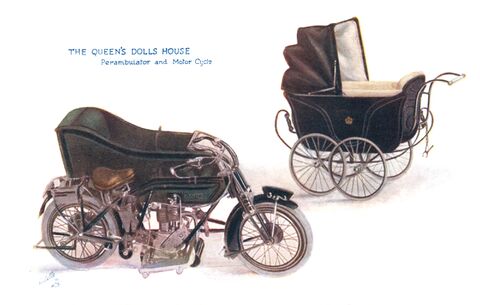 Among the miniature but marvellous articles in the Garage of the Queen's Dolls' House, besides the Motor Cars and their accessories, spare tyres, etc., are a Motor Cycle, shown in the picture with a Sidecar comfortably upholstered, and a Perambulator emblazoned with the Royal monogram, which will be the envy of all babies.