From The Brighton Toy and Model Index
Jump to navigationJump to search
==This exhibit is scheduled to go on display during 2016, as part of the museum's 25th anniversary improvements==,

An "Oilette" postcard of "Garage showing interior of rooms above", The Queen's Dolls' House (later to be known as Queen Mary's Dolls' House), produced by Raphael Tuck and Sons ("Tuck's Postcards") catalogue number 4505-2. These postcards started to be produced in 1924, when the dollhouse first went on public display.

SERIES VI: ROUND ABOUT THE HOUSE 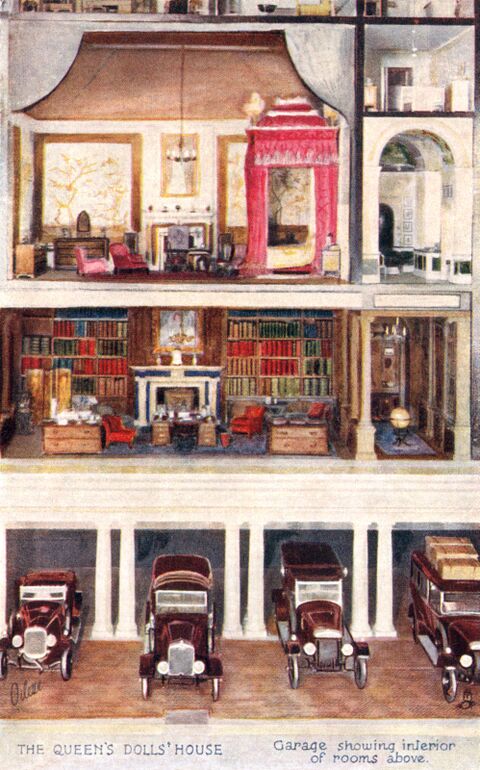 IV: 4505: THE GARAGE, SHOWING INTERIOR OF ROOMS ABOVE

The walls of the Queen's Dolls' House are here shown elevated, and reveal to our view the rooms of four floors. Below is seen the Garage with its fleet of Limousines and Touring Cars; on the first floor we see the noble Library, above that, the King's Bedroom and Bathroom, and higher still, the Boudoir and the Night Nursery with its adjoining Bathroom. An excellent idea of the arrangement of this marvellous Dolls' House is given by this picture.