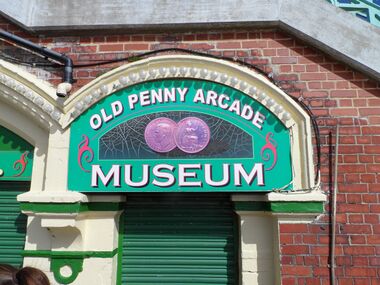 The Mechanical Memories Museum is/was a museum of penny arcade machines on Brighton's seafront, next to the Carousel bar. The actual name of the museum seems to have been somewhat flexible, with "A-frame" signage reading "MECHANICAL MEMORIES, Brighton's famous OLD TIME PENNY ARCADE Old Fashioned Fun For Everyone!"

As of 2018, we're not sure about the museum's current status. The last time we passed by (September 2019), the space was open and you could go in and the machines were still there, but its website appears to have shut down in 2016, and currently shows content in (Chinese?) characters on unrelated subjects, which suggests that the museum may not be fully active. There's no entrance charge, so its worth popping in if you're passing.

Mechanical Memories Museum is situated on Brighton's seafront, and is the UK's oldest established vintage penny arcade. The museum has about fifty vintage penny slot machines, dating from the early 1900s to the 1960s, all in working condition for the public to play. Tens of thousands of visitors are entertained each year.......

Part of the defining theme for the "Old Penny Arcade Museum" was the idea that all the machines took old pennies, which could be purchased from the operators. The problem with this idea was that the museum needed to be constantly staffed. In its current incarnation (where one just wanders in and uses the machines), the machines that we had a quick look at had now been updated to take 20p pieces. This may explain why the green "Old Penny Arcade Museum" signage shown above has now been moved inside.